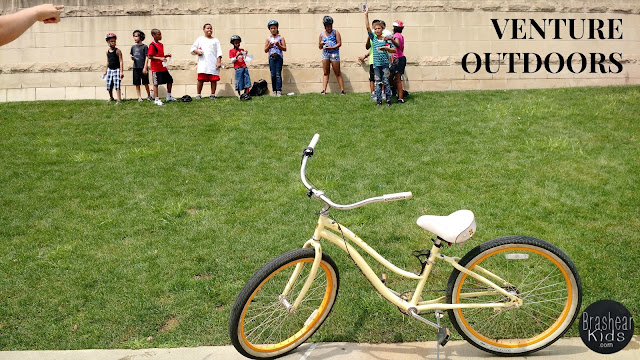 This week saw the close of summer camps at ALEC for the 2016 season. We're sad to see the summer end, but we're so grateful for all the fun we've had along the way. And we certainly went out with a bang! It was week two of Outdoors Camp! 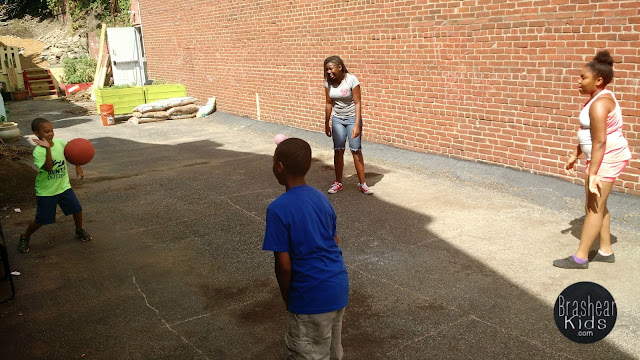 The Brashear Kids warm up for the week with our billionth game of four square!

On Monday, we went geocaching! Teachers from Venture Outdoors brought us some hand held GPSs with coordinates already programmed in. The kids split into teams, and used their GPS to find clues hidden all around Grandview Park! The clues helped us solve a riddle. It was a fun way to get our brains and our bodies working at the same time. 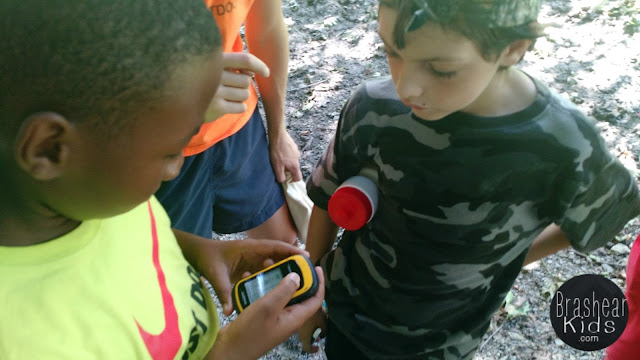 On Tuesday, we went biking again! This time, Mr. Evan and Ms. Brittany played a game with us before we started riding. We split into two teams, and had a relay race to see which team could correctly identify different parts of the bicycle the fastest! Afterwards, we rode about two miles down the bike trail at North Shore Riverfront Park. Some of our kids still weren't quite comfortable on the bikes, so they hung back and played in the Water Steps fountain instead. Everyone still got to spend time outside and stay active, regardless of their skill level! 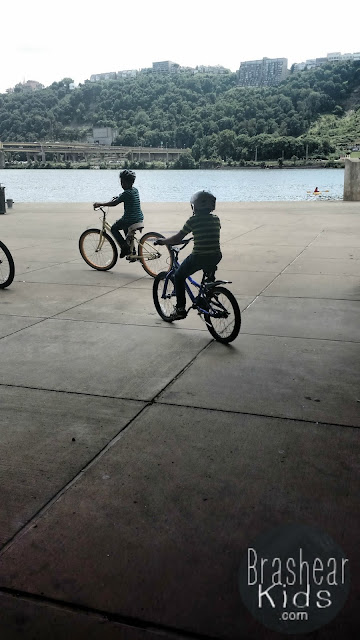 On Wednesday, we went kayaking! This was another activity that we did last week, but we felt it was work repeating. This trip went even more smoothly than last week, since a majority of the kids had done it before. Some of the kids that were scared to go out on the water last week jumped right in a boat with a friend, instead of a teacher! It's always rewarding to see your students find confidence in themselves when participating in new activities. 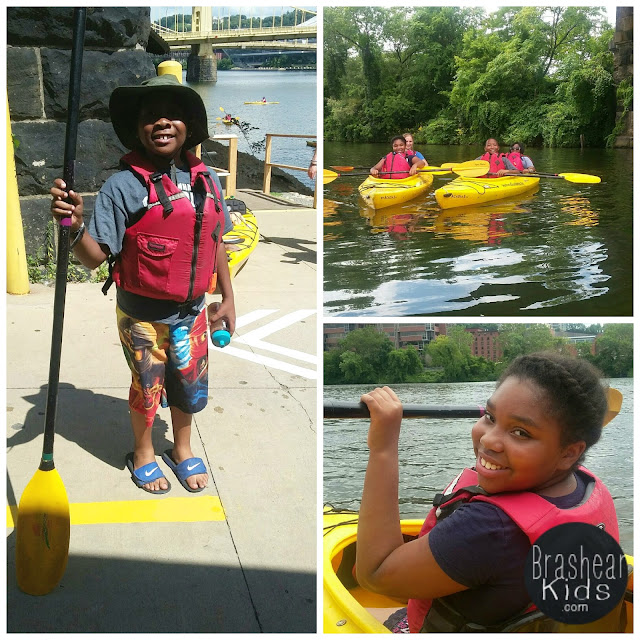 On Thursday, we teamed up with The Western Pennsylvania Conservancy to make some seed bombs and plant some trees! The seeds in our bombs were all redbud seeds, as part of the Pittsburgh Redbud Project. Redbuds are trees that are native to the Pittsburgh area, and they have beautiful flowers that are similar to cherry blossoms. The idea is to plant over 1,200 redbud trees, so that the city is filled with pink every spring. We even got a seedling to plant in our Green Playce, and we all got to take home seeds to plant ourselves! 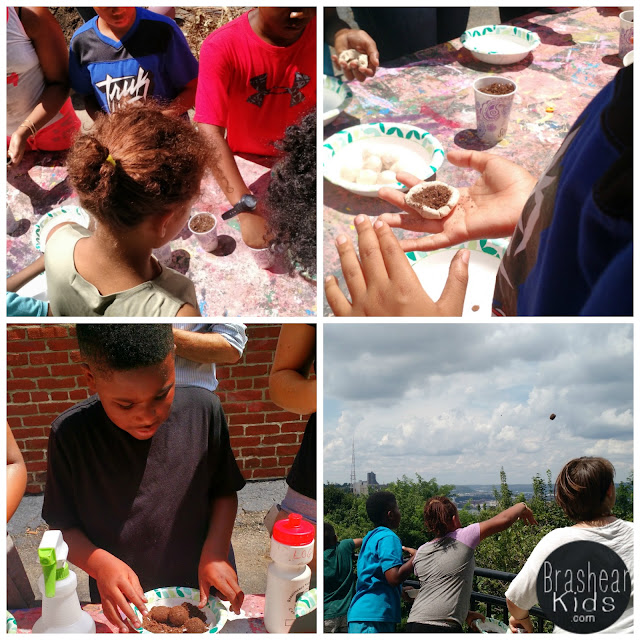 Afterwards, we went on a hike in Grandview Park, played on the playground for a little bit, and then we got some goody bags from Venture Outdoors! Each kid got a certificate of completion, a nifty new t-shirt, and a voucher to be used for kayaking or biking. That way, the kids can get their families moving as well! Spending time outdoors doesn't have to end with Outdoors Camp, after all. 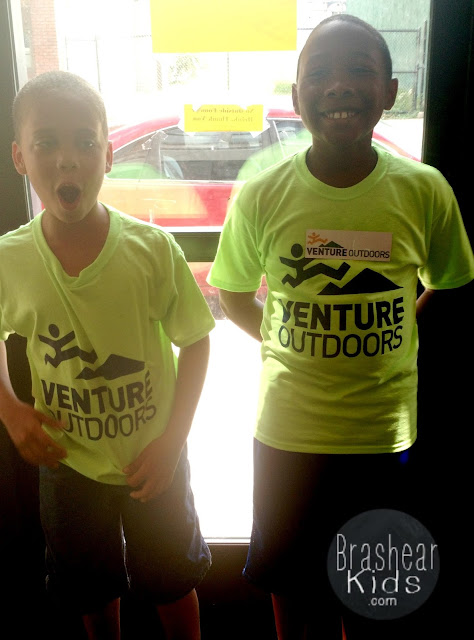 Goofy faces due to being tickled just moments before this photo was taken.
You'd be surprised how hard it can be to get them to smile!

ALEC is usually closed to the public on Fridays. But since this week was our last week of the summer, we had a family outing on Friday night! We were worried that rain might ruin our trip, but we got lucky! The rain held off for us, and we had a blast. It was awesome to see parents, grandparents, aunts, uncles, cousins, etc. get to take part in what their kids had been doing for the last two weeks.

After we got back on land, we had a pizza party on the steps outside PNC Park! Most of the parents and guardians agreed that kayaking is pretty cool. We think there's a good chance that most of the vouchers from the goody bags are going to get used pretty quickly! 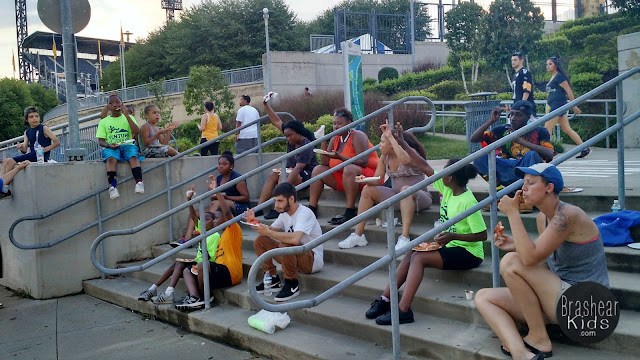 Again, thank you so much to Venture Outdoors, The Western Pennsylvania Conservancy, and all the parents and family members that let their kids hang out with us. Y'all made this week pretty special! We hope to see everyone this fall during the school year!!

Posted by Unknown at 1:11 PM
Email ThisBlogThis!Share to TwitterShare to FacebookShare to Pinterest