Well Brashear, it's been a whirlwind seven weeks. Even though I wasn't here for long, I hope that I've had a positive impact on the ALEC community. I'm sad that the summer went by so quickly, but I got to have a lot of fun with a really cool group of kids! 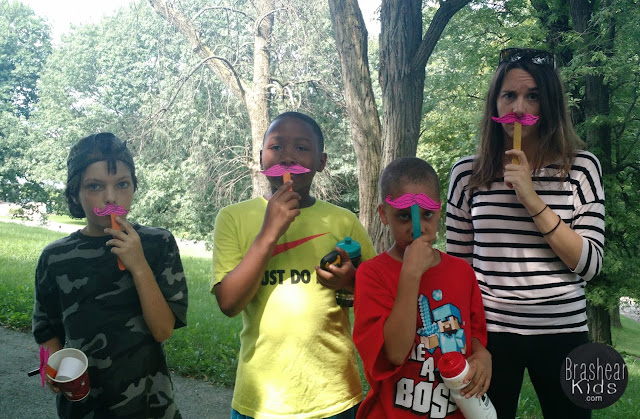 Mustaches do make one feel rather serious.

I've been with KEYS Service Corps since May 2015, having served previously with the Hilltop YMCA before coming to Brashear. I love the Hilltop neighborhoods, and I was really excited to continue getting things done in this area. What does the daily routine of an AmeriCorps member placed at Brashear look like, you ask? Well, I would arrive at ALEC few hours before the kids, sit at my computer, get coffee, work on blog posts and paperwork, other boring grown up things, etc. I played four square for about two hours every day. (Every. Single. Day.) In fact, I could probably get certified as an official four-square judge and referee, if such a thing exists. I taught some lessons, I sat back and let other people teach some lessons, I prepared snacks, I obsessively counted children, I perfected a shovel-and-pole technique for retrieving balls that bounced over our fence, and I took a lot of pictures. I mean, a lot of pictures. 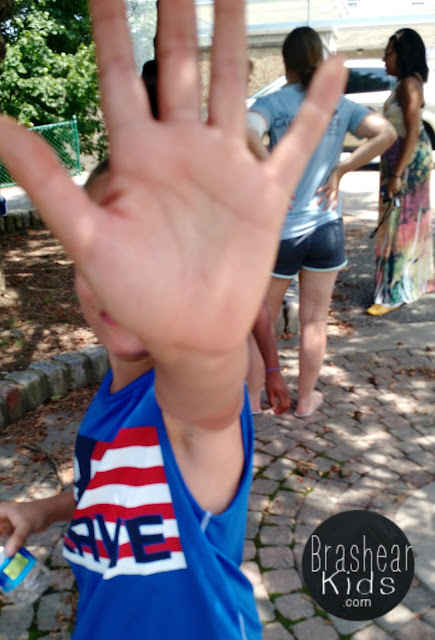 Though it would appear that some people found my constant picture taking just a smidge irritating.

Since I was usually busy taking all the pictures, there aren't many that I'm actually in. However, I did manage to squeeze into a fair number of group shots! 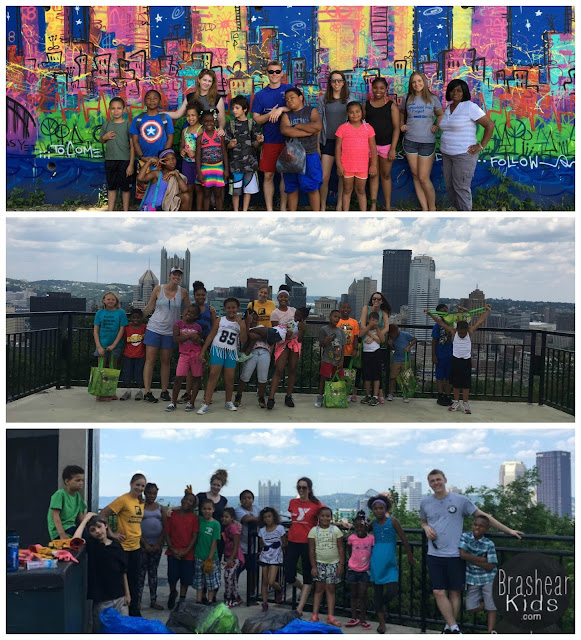 But mostly what I did at Brashear was have fun. I spent more time outside this summer than I probably have in the last five summers combined, and I have a weird tan line on my feet to prove it. I've gone through Eco Camp, Tech Camp, Go! Camp, and Outdoors Camp alongside all of the kids, and I've had just as much of a blast as they've had. (Maybe more. I really like kayaking). 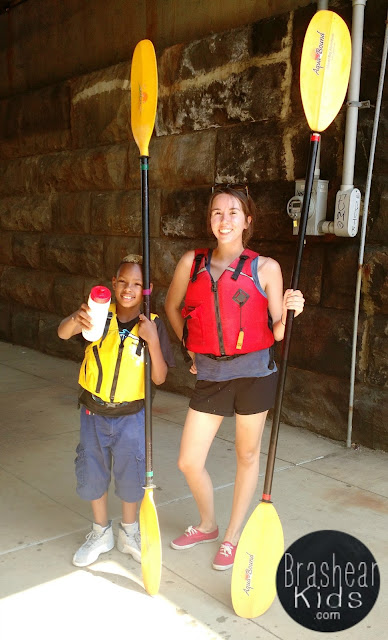 The best darn kayak partner a gal could ask for. And I only got hit in the face with a paddle once!

As a way of encouraging the kids to be adventurous eaters and try new foods, Ms. Amber encourages the teachers to also partake in whatever snack is made for the day. Which means that I got to eat a lot of real good stuff. Pesto, smoothies, summer salad, trail mix, peanut butter bagels, carrots and hummus, big slices of watermelon... It was ideal. Not only was I well fed, but I got to see the kids start to ask for healthy things and really begin to take an interest in how their food was prepared. Also, it is really funny to see an eight-year-old politely say "I don't care for this" when offered a food he or she doesn't like. The kids aren't allowed to say that something is "gross" or "nasty," because 1) it's a bit rude, and 2) it might discourage another person from trying it. Everyone should be able to decide what they like for themselves! 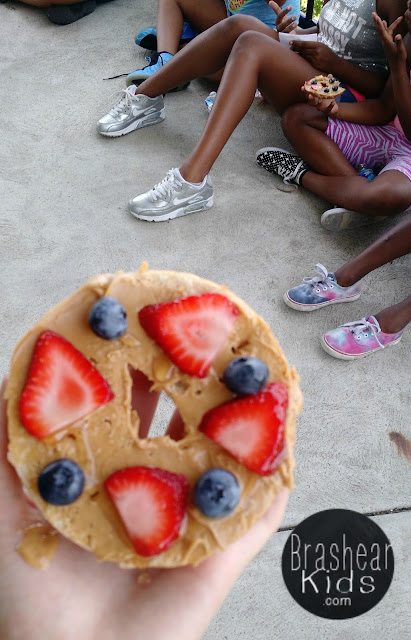 I mean, is this not one of the most delicious looking bagels you've ever seen?

Some elements of our snacks were grown in our very own garden. The garden is one of my favorite aspects of ALEC. I love gardening. In fact, when I started at Brashear, I came bearing a gift of about 20 sunflower seedlings that I had been keeping on my fire escape. I just think that watching stuff grow is the coolest thing. The Hilltop neighborhoods simply don't have a lot of easy access to fresh produce, and the fact that we have it mere steps away from our back door is a really empowering experience. By teaching the kids how to garden at ALEC, we give them the building blocks to start a garden at home with their own families. We made pesto with our basil, salsa with our peppers, and infused water with our mint. We've devoured strawberries that we grew ourselves. There's even talk of making our own pickles with our cucumbers! And of course, we have some flowers growing, too. Gotta look out for our pollinator friends! 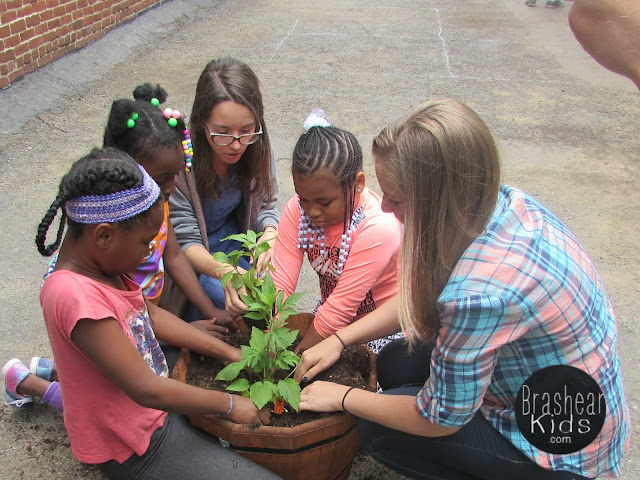 Getting your hands dirty can be pretty cathartic.

I got to work with some really amazing organizations during my time here, as well. GTECH, Venture Outdoors, Y on the Fly, Pittsburgh Soccer in the Community, The Western Pennsylvania Conservancy... The list goes on. Partner organizations are extremely valuable to us, because they give our kids so many opportunities that we would be unable to offer if we were trying to do everything all on our own. Teamwork really does make the dream work! 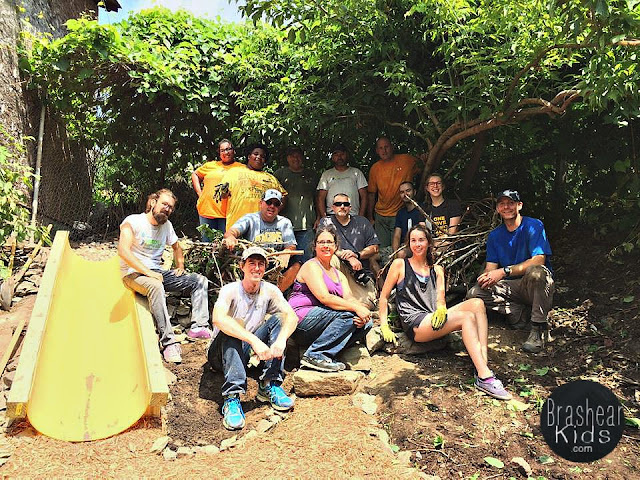 Lookin' fresh as a daisy with GTECH and some volunteers from AE Works Ltd. As of this writing, our Green Playce is almost finished!
You can check out the project plan here!

Throughout my term with AmeriCorps, there were days that were wonderful and goofy and fun, and there were days that could be best described as tragic. Regardless, this past year has been one of the most rewarding experiences of my life. I've been so lucky to connect with the people I've met, both adults and children. Thank you to anyone and everyone who has supported The Brashear Association, because it's an organization that truly does good work. I love all my kids, and as long as they continue to get support from Amber and the rest of the ALEC staff, I know I can expect great things from them as they get older. This time last year, I had no idea what I was doing with myself. Now, I'm heading to the University of Pittsburgh to get a master's degree in social work. My experiences as a KEYS member were instrumental in that decision, and I can't wait to find out what wacky hijinks I get myself into next. 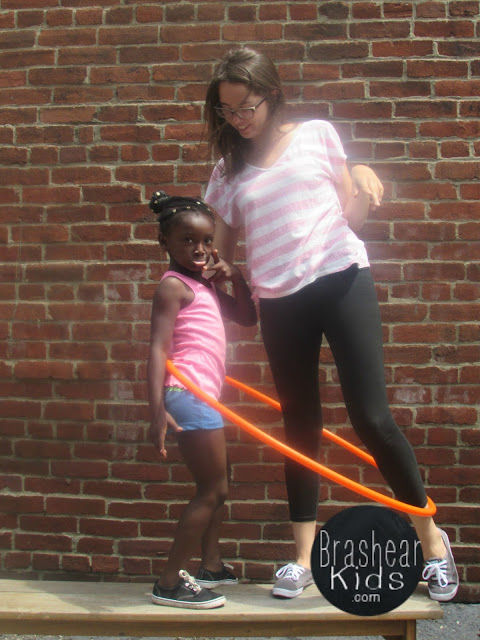 Posted by Unknown at 12:18 PM
Email ThisBlogThis!Share to TwitterShare to FacebookShare to Pinterest