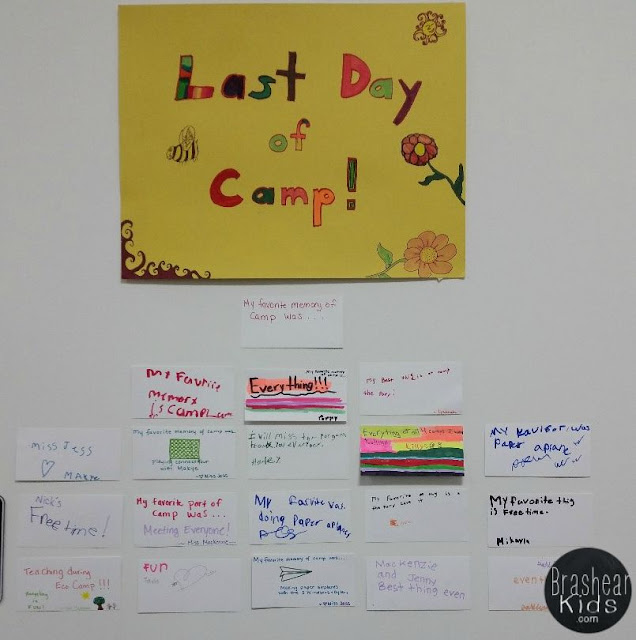 For the last two weeks, the kids have been learning what it means to be a Maker and have been exploring their creative side.  We had Mr. Anthony from the Millvale Library Maker Program come and lead camp. 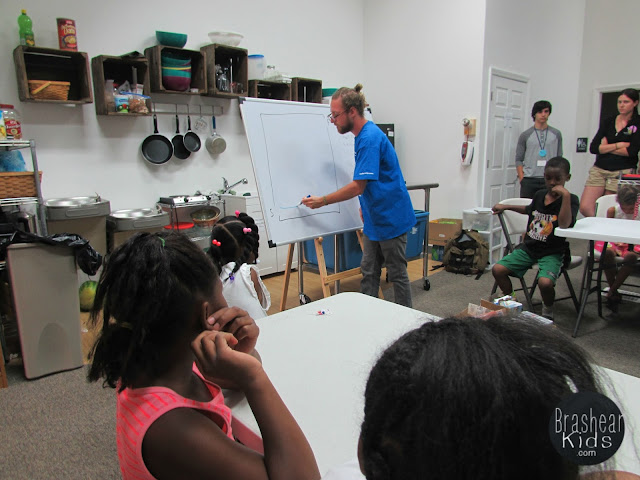 The focus of Maker Camp was to use elements from the STEAM education curriculum to teach the kids more about math, science, technology and applying that to the kids individual, creative ideas.

Monday: On the first day of camp, Mr. Anthony had the kids create their very own board games out of cardboard.  Once the kids learned that this was on the agenda for the day, they wanted to instatnly jump in and start cutting cardboard up and building things.  Mr. Anthony used this opporunity to teach the kids about the importance of planning.  He gave them a scrap piece of paper and told them to sketch out their ideas. 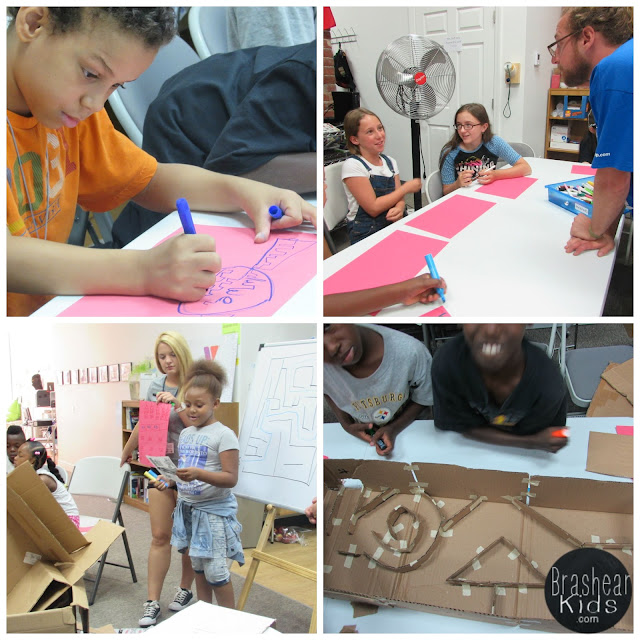 After they had their game idea sketched, each child had the opporunity to stand up in front of the class and explain just how their game would work.  During this time, the kids not presenting were able to give their input to aid the game creator with new ideas and help fix potential problems with their game.  Next, materials were passed out and the kids ideas that started on paper, turned into real life games. 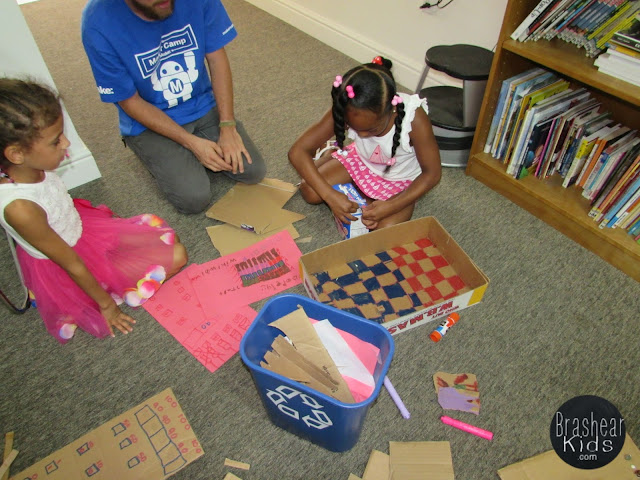 It was really awesome to see the kids working together and using the tools of planning.  In addition to games, the kids also made mazes and some even had a chance to play each others games!

Tuesday: On the second day of camp, the kids became scientists for the day!  They learned all about measurements, observations and even a little chemistry.  During observation time, the kids were given a Styrofoam bowl.  Then, on a piece of paper, they had to write down exactly what they saw, smelled, touched, tasted and heard in regards to the bowl.  Mr. Anthony taught the kids about water and how 2 Hydrogen and 1 Carbon molecule make up water.  He even had a demonstration where two kids got red water and one kid got blue and they mixed them together to create "water"!  It was a great visual demonstration to help the kids! 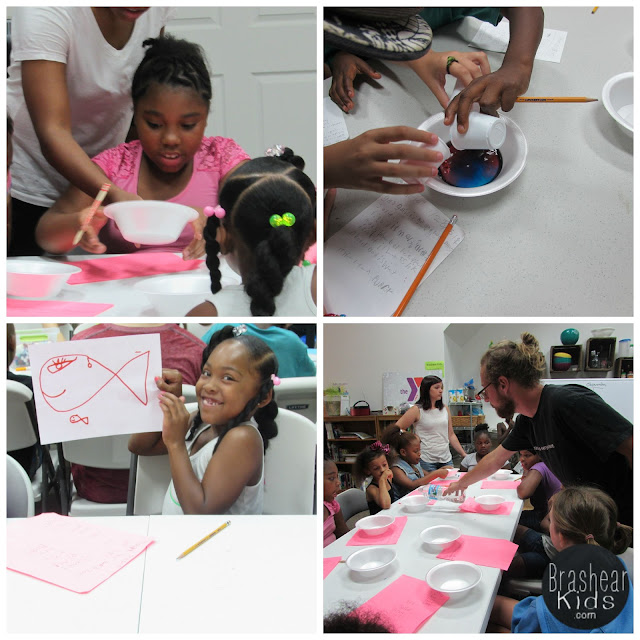 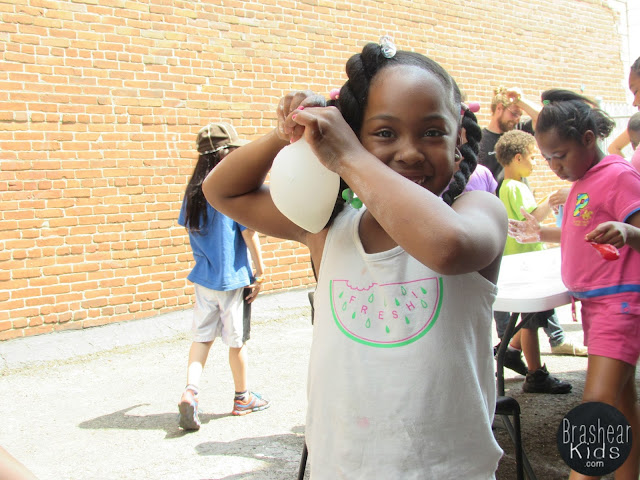 It was really cool and the kids loved it!

Wednesday:  The third day of camp was all about My Plate and smoothies! Yum! The kids were split up into two groups and one started at the smoothie station and the other at recycling.  In the recycling station, Miss Mackenzie taught the kids about the importance of My Plate.  My Plate is the new food Pyramid and is used as a tool to teach kids (and people in general) the importance of a diet that is balanced, full of variety and is properly portioned. 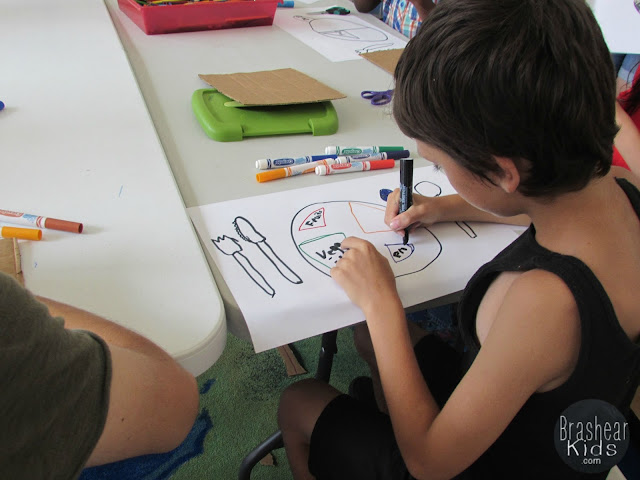 The kids went ahead and made their own plate that they filled with good food with correct portions. In the smoothie station, the kids split up into teams.  Mr. Anthony brought a variety of smoothie ingredients including : carrots, kale, cucumbers, strawberries, blueberries, granola and even coconut. Working together, each group picked a couple different ingredients for their smoothie.  Next, Mr. Anthony showed the kids how to properly clean and cut their ingredients. 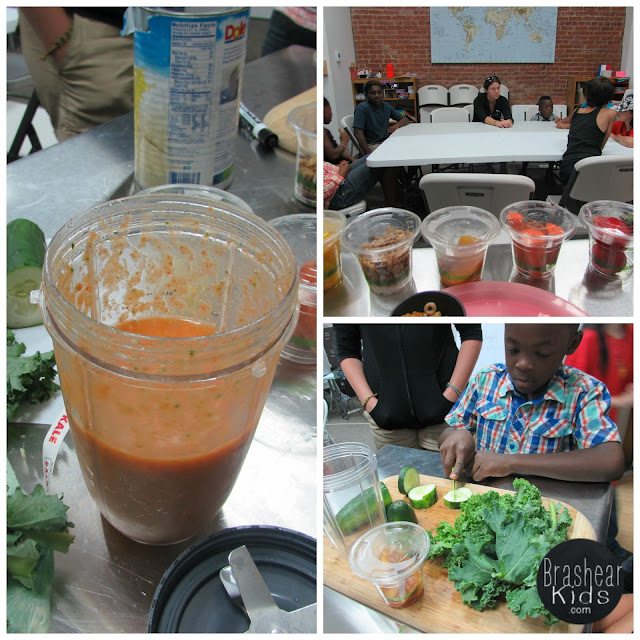 Some of the kids even got to learn how to properly use a knife!  Next, all the ingredients were added to the blender and VIOLA! We had ourselves a smoothie!  Each team got to try their own creation first and then they got to switch and try the other teams! It was a delicious day at camp, that's for sure!

Thursday:  It was station day on the fourth day of camp! There were four stations around ALEC: a Measuring station, a Little Bits station, a Makey-Makey station and an iPad station.  The kids were able to use this time to just explore the different stations and let their imagination blossom. 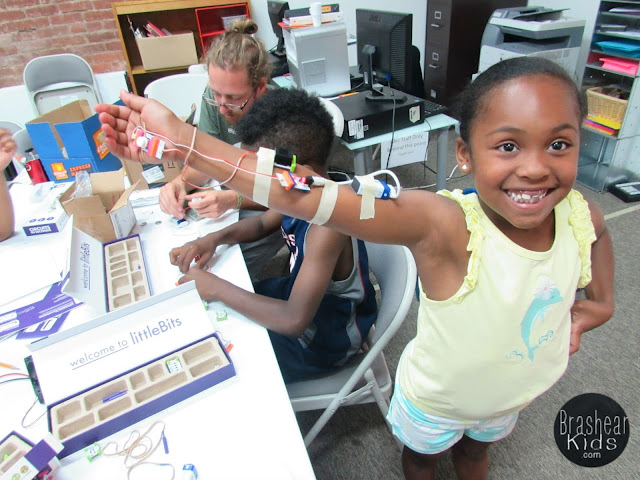 The kids had a lot of fun going around to the different stations.  During free time, the stations were left up so that the kids could continue exploring different kinds of technology.

Monday: Week two of Maker Camp started off with Mr. Anthony teaching the kids about the different kinds of energy found in the world.  The kids learned about solar, water, wind energy to name a few!  Before the main activity could begin, the kids got to make their own playdough! 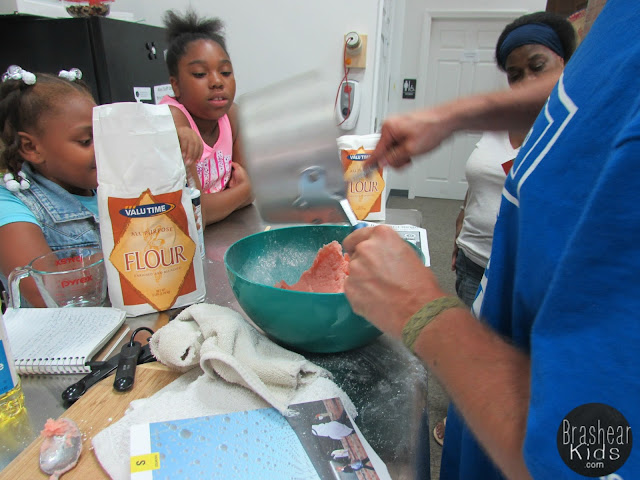 That was a big hit!  After the playdough was made, the kids were split up into groups.  In each group they were given a piece of paper to plan an eco efficient art piece.  Each piece was given a location, a color, a shape and a type of energy the piece had to use. 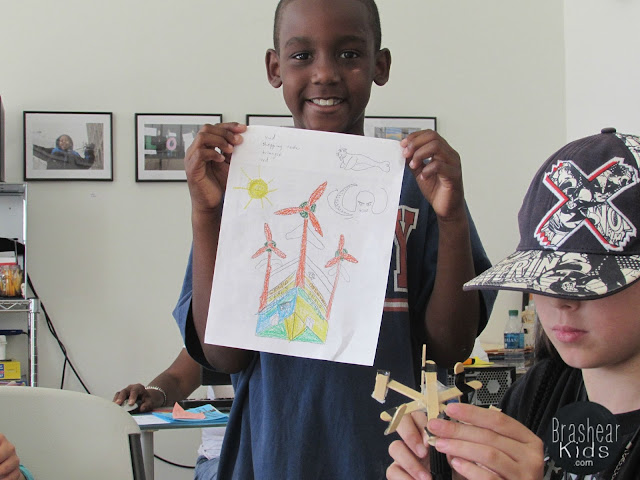 The kids talked about their different ideas and then sketched them on the piece of paper.  After that, they used materials like playdough, cardboard and wire to create their art piece! 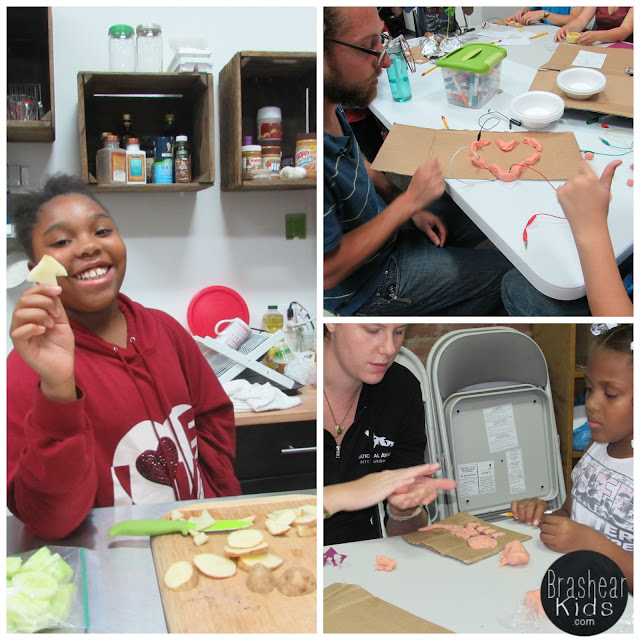 The kids again used their planning skills they have been working on and drew out their own controller for the Makey-Makey.  After that, it was time to bring that drawling to life! Some kids made arrows out of apples, or playdough dogs and hearts as their controllers!  They had fun using their creative controller to play fun games like Frogger.

Wednesday:  Its a bird, its a plane, its superman! Just kidding! Its paper airplane day! The kids made paper airplanes today, which was a ton of fun!  There were planes of all different shapes, sizes and colors.  Some planes flew faster, some flew farther and some (like mine) just flew straight into the ground. 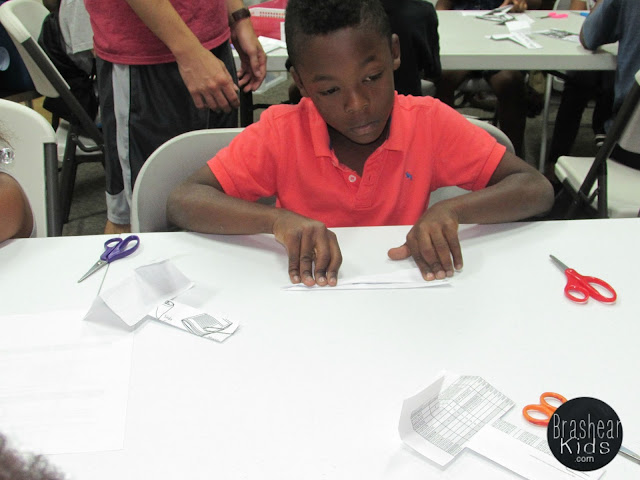 The kids measured how far and fast their planes flew and then compared them to each others.  After that, they tried to figure out how to make a plane that would be the fastest and fly the farthest!  It was a fun day of competition!

Thursday:  Reduce, Reuse and Recycle was the last day of camps theme.  Mr. Anthony had the kids draw different objects like, jars, cardboard, bags, wood, etc. and figure out if you could reuse or recycle them! 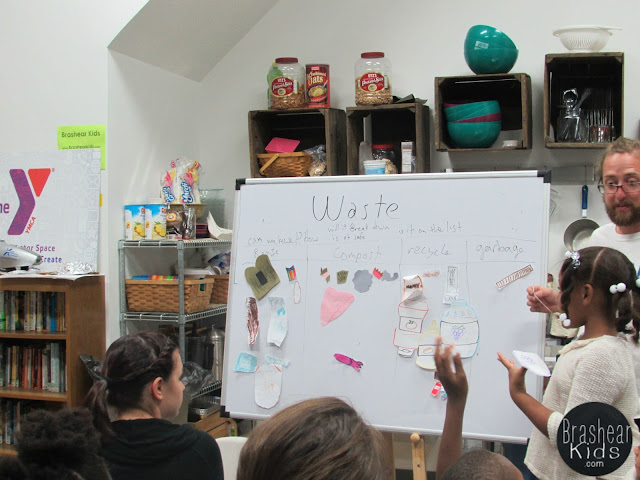 To the kids surprise, you can reuse and recycle a lot of things instead of just throwing it away!  To give the kids a real life example, we headed over to the new coffee shop, Black Forge, which is right across the street from ALEC. 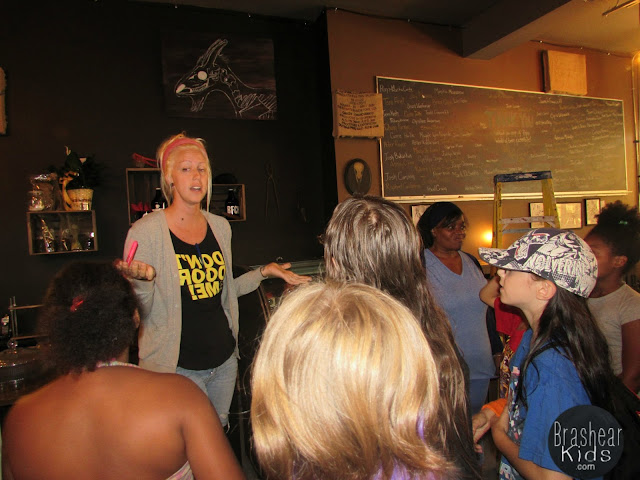 There, we welcomed Black Forge to the neighborhood and they gave us their coffee grounds! 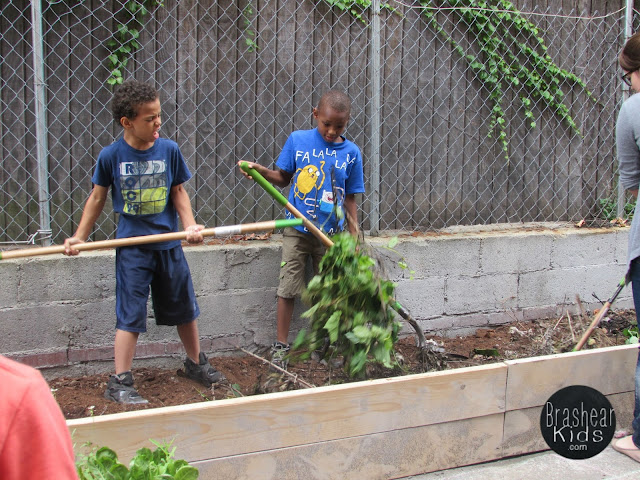 Mr. Anthony told the kids that we can reuse the coffee grounds as compost in the garden at ALEC! During the end of day, we had a end of camp party! Parents came to check out our space and to see what kinds of fun things the kids have been up to at camp!  It was a great way to end a great summer!

- Jen
Posted by Unknown at 10:00 AM
Email ThisBlogThis!Share to TwitterShare to FacebookShare to Pinterest