Recently, students at ALEC learned a few new tidbits about Mexico for Culture Day. We explored sights, tastes, sounds, and more. We learned a lot and had fun!

First, the students located Mexico on the map. Then, we peered into a classroom located in Zihuatanejo, Mexico. The students love to compare their classrooms with others around the world.

Next, students learned the difference between Halloween and the Day of the Dead by looking at the following infographic. Some of the students thought the holiday sounded spooky at first. The more they learned about Dia de los Muertos as a celebration, they went from spooked to excited! For some multimedia fun, students watched the following short film, Dia de los Muertos, a CGI Student Academy Award Winner. This short film does a great job at capturing the beautiful spirit of this Mexican holiday. A few of the students were actually familiar with it.

Learning happens in many forms. We needed another activity to really make learning about Mexico, a treat. So, why not make a traditional drink that is fun to make and very tasty? I introduce to you, Mexican Horchata! After some searching around, noshon.it seemed to have done all the hard work of researching and trying out the best authentic recipe. So, I decided to give it a go.


This was so fun to make with the kids! What is awesome about this recipe is that it only has a few ingredients which tend to be around the house already. If you are trying this at home or school, be prepared to spend some time on the prep work. The rice and almonds need to soak for 5-10 hours. So, I did the initial prep work and the kids finished the recipe.  Just be prepared! It's worth it. What you need to get started:
Yields 12 Servings

Step 1:
I boiled water and added 2 c. of almonds for 1 minute and then rinsed them in cold water.

Step 2:
Then comes, what I would consider, the fun-at-first-then-soon-tedious part. I then pinched each almond. This causes the almond to fly out of the skin. This is needed for toasting (see next step).

Step 3:
Next, over medium heat, I added the blanched, skinless almonds to a pan to toast them. I didn't have a pan so I ended up using the pot I had. So, I didn't do the best job on toasting the almonds but, not to spoil the surprise, the horchata still came out awesome.

Step 4:
Now for the rice flour. I blended 2/3 c. of rice in a blender until it was a fine powder. This was fun because I've never done this before and I was interested to see what the flour would look like. 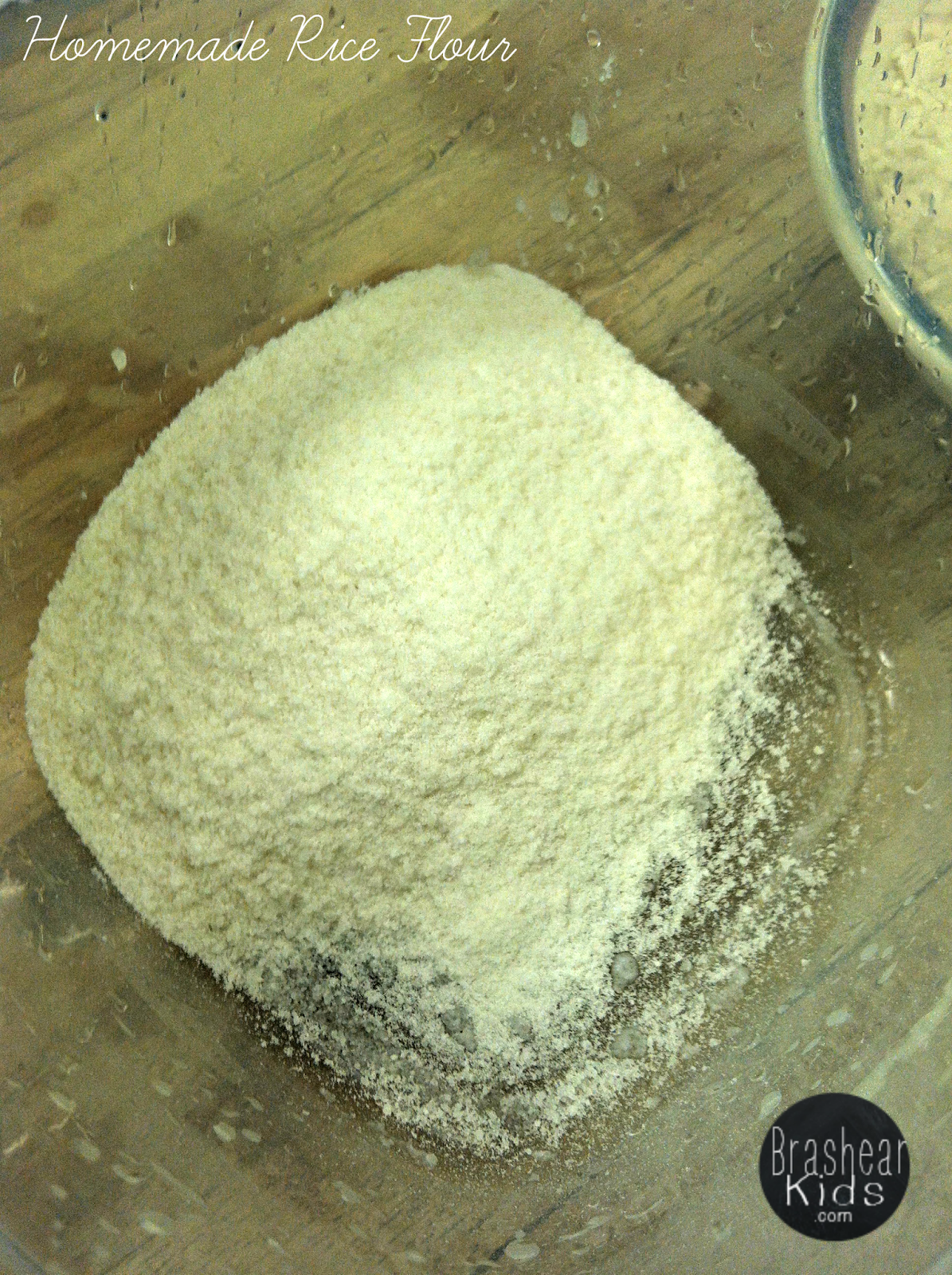 Step 5:
Next, I added 2 cinnamon sticks, the rice flour and almonds to 6 cups hot water. I used hot tap water microwaved for a minute. FYI: The container you add this into needs to be big enough and have a lid.

Step 6:
Let the mixture cool down to room temperature then cover and let it sit on the counter for 5-10 hours.

Step 7:
Make some simple syrup. You will need 1/2 c. - 1 c. of simple syrup depending on the sweetness you desire. To make simple syrup I added 2/3 c. sugar and 1/3 c. water into a glass dish and put in the microwave for 3 minutes. I stirred halfway and at the end. (I stored this in a container for the kids to add later.)

Fast forward 5 hours later! This is when the kids got involved. Lets just say, they weren't sure about the weird looking mixture at first but they loved helping out!

Step 8:
Remove the cinnamon sticks and blend the mixture with 4 cups cold water. We used our new Vitamix blender which allowed space for all the liquid, but you may need to blend in two parts. Step 9:
Pour the mixture over the cheesecloth into a bowl. We lined a strainer with cheesecloth and it worked okay. If I were to do this again, I would buy another piece of cheesecloth to avoid some of the gritty rice and almond pouring over the side. This little bit didn't alter the taste of the final drink though. Step 10:
Add the simple syrup from step 7 to the strained mixture and stir.

Step 11:
Pour over ice and garnish if desired. The students had apple slices for snack time this day so they came up with the idea to garnish their drinks with a slice. So cute! After one taste, one of our 7 year old students said "Mmmmmm! This is really tasty!" This started a chain reaction and everyone else tried theirs and not one person disliked it. What a delicious adventure!

That wraps up our awesome culture day learning about Mexico. I hope you enjoyed reading about our fun-filled day. Before I go I just want to say, you have to try this recipe! Yum!

- Corey
Posted by Unknown at 10:44 AM
Email ThisBlogThis!Share to TwitterShare to FacebookShare to Pinterest