"The sky broke like an egg into full sunset and the water caught fire." - Pamela Hansford Johnson

Let's talk about how much fun we all had when Angela Fullard from Oddity Illustrations was our guest artist for the New Artists program! The students were pumped to see her unique, mixed media illustrations. When they found out that they too were going to be able to make a collage with tissue paper, magazines cut-outs, paint, and cardboard, they were giddy with excitement. Read on to see what we did! 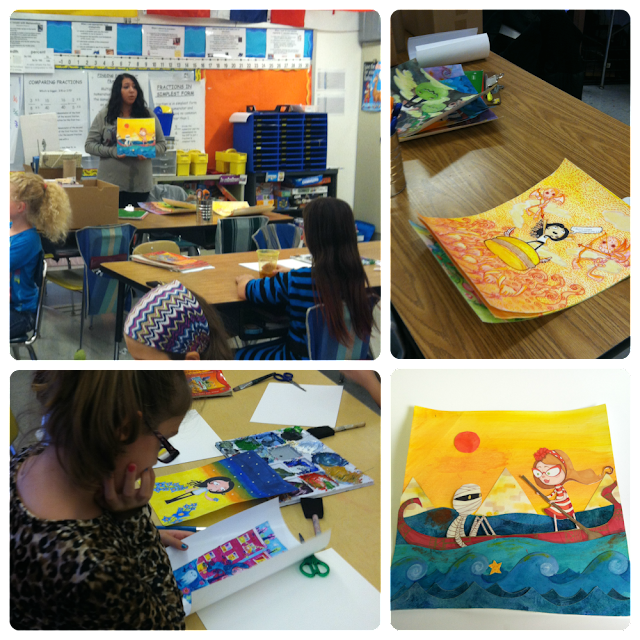 Before the students began their art project, they got to know Angela and her art a little better. She told them about what she does as an illustrator. Some of the students guessed that an illustrator makes the pictures for books. Miss Angela passed around a lot of her art and she told them about her process of using watercolor, oil paints, ink, and paper. She layers a lot of her work to get her unique finished illustrations. Once she has her composition the way she likes, Angela scans her art. Once it's scanned onto her computer, she edits her piece to complete it and then orders digital prints.

The students thought it was really neat to see her work in progress, her collages, and her digital prints. It was like taking a journey through an artists process. The students also had a chance to ask her questions. A few asked her how she came up with her characters. One student asked if the main character was her. So intuitive! Angela said that she does give one specific character her likeness. Another student asked if she ever draws animals. To answer this question, Angela revealed 2 prints she had created that showed some creatures. Angela showed the students her "blueberry" bats. Some of the students wanted to know how she came up with her ideas. To this question, Angela said that she wanted to create her own world and loved the freedom of being able to make animals, characters, and creatures look just how she wanted, even if that's not how they would look in the real world.
There were lot's of "oohs" and "aahs" during the beginning of class. I think they really liked her art! 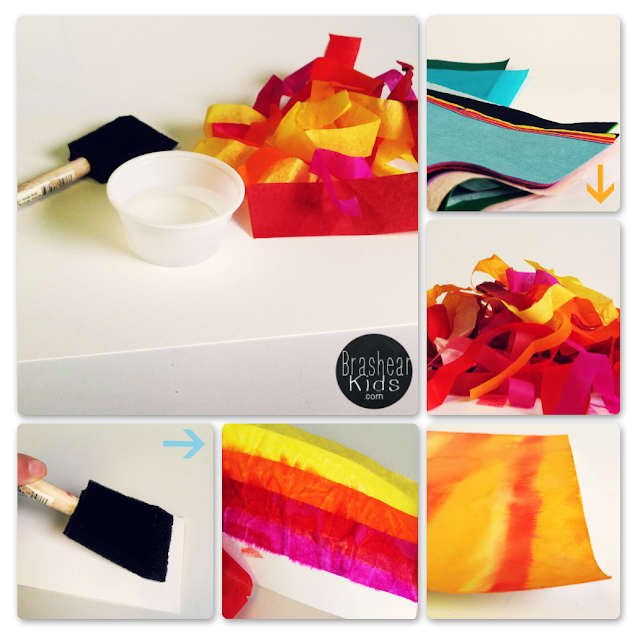 Next, Angela and I instructed the students about collages and how to use different mediums. A medium is something used in art such as acrylic paint, oil paint, markers, pencil, magazine cut outs, found items, etc. A mixed media collage uses a blend of different mediums.

For this project, students created their own Seascape collage. This art project had a few different parts. There is the background, which resembles a sunset; blue painted paper cut and ripped, which resembles the ocean waves; and magazine cutouts and cardboard, which resemble a sailboat. When all these parts are put together it looked like an awesome Seascape.

In the above picture, you can see the process of how to create the background of our Seascapes. We used a new technique to "paint." First, I collected quite a few large sheets of tissue paper in various warm colors (red, pink, orange, yellow, etc.) and cut them into strips. Then, the students wet their paper with sponge brushes and water. Next, they layered their tissue paper strips all over the paper. Some overlapped a lot and some just a little. A few put a ton of water and some put just a bit. Once the water dried a bit, we removed the tissue paper and our colorful backgrounds were revealed!

Each resulted in a unique backdrop for the Seascape collage. If you are trying this at home, make sure the tissue paper is the bleeding kind (the kind we used specifically said "bleeding paper"). Also, the ink from the tissue paper will stain, so exercise caution! :) 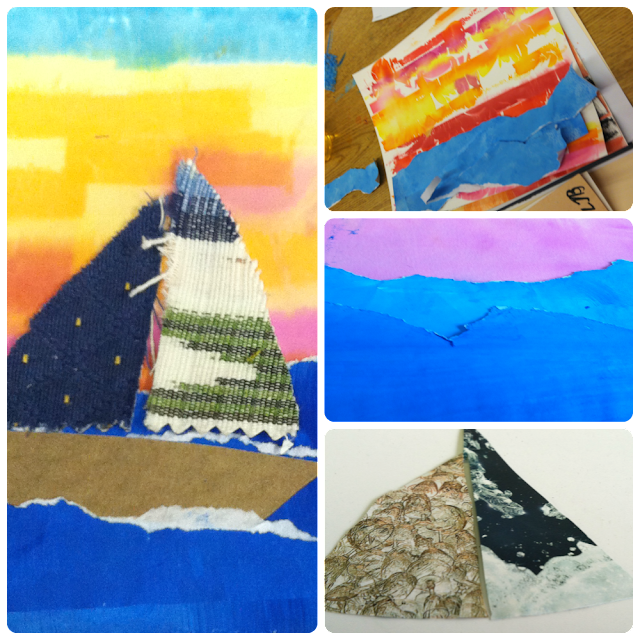 They loved finding interesting textures and designs in the magazines to cut out. This tied in really well with our previous lesson on texture. The New Artist students also enjoyed cutting and ripping their painted blue paper to make sea waves.

After everything was cut and dried, the students found themselves layering everything and using glue to place their waves and sailboats where they wanted. After some trimming of edges, their collages were complete! Check out a few of our students finished designs. The students had such a great time creating their collages. Thank you so much Angela for inspiring our New Artists!

- Corey
Posted by Unknown at 12:41 PM
Email ThisBlogThis!Share to TwitterShare to FacebookShare to Pinterest