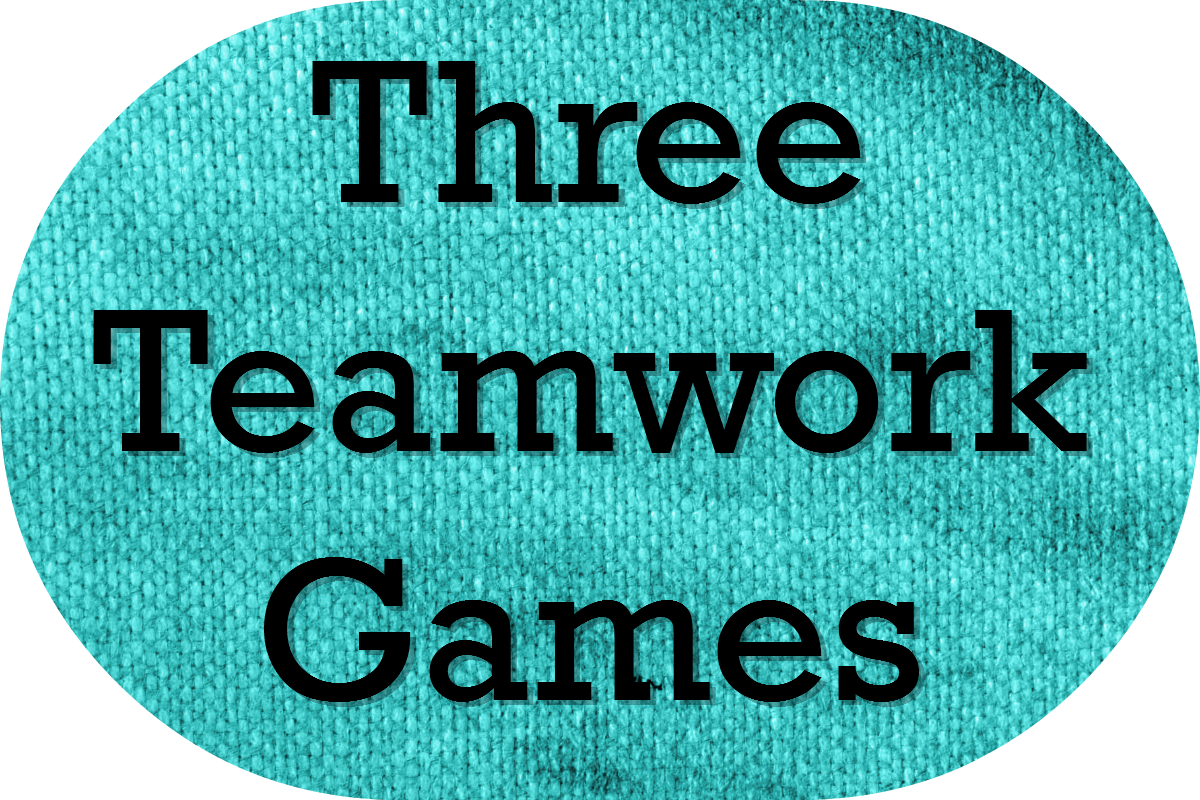 For a recent community day lesson, the ALEC students practiced their teamwork skills with indoor games. The activities were meant to emphasize the importance of cooperation, so the kids were reminded to be kind, patient, and forgiving of each others' mistakes as they worked together. These games are great for programs that have limited space or for when the weather keeps kids indoors. 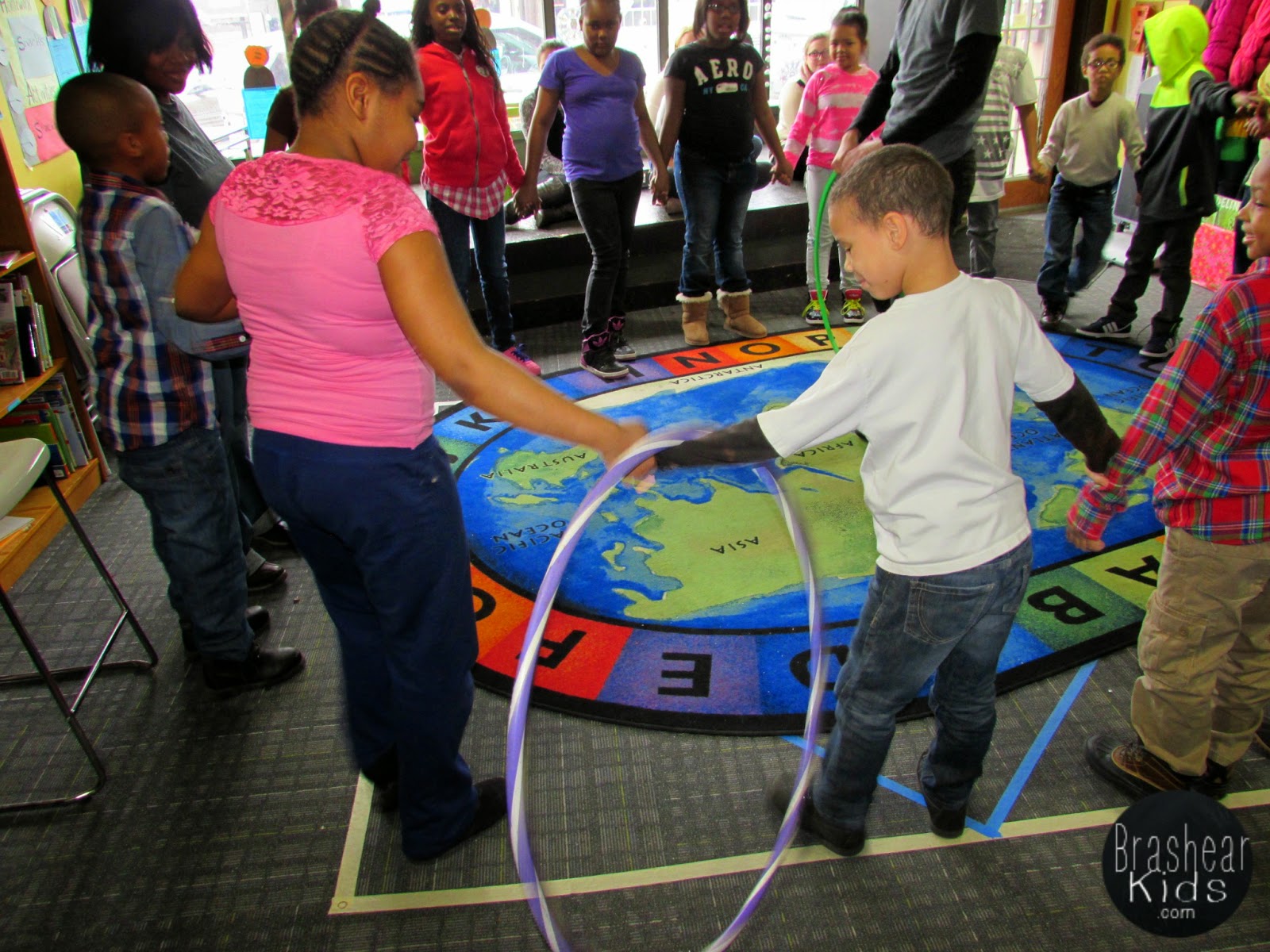 1) HULA HOOP PASS
This game began pretty simply, with all the kids and a few teachers standing in a circle. Then they joined hands with their neighbors to make a big ring, having two of the students link link their hands through a hula hoop. Finally we got down to the rules of the game. The group has to pass the hoop all the way around the circle without letting go of each others' hands. They can bump and nudge the hoop to help their neighbors, but they can't let go of their neighbors' hands.
After much writhing, stumbling, and contorting the hoop made it around the circle! The kids were ecstatic at their accomplishment. Then, I introduced the second round of the game. This round was just like the first, except for the second, slightly smaller hoop that I started opposite the first and headed in the opposite direction. The game is no harder than before except when the hoops collide:

Whoever finds themselves with both hoops has to wriggle their way through both while sending them on in the right directions. With some help from neighbors and encouragement from the rest of the group, the hoops made their ways home. This game was a test of the group's ability to remember and follow rules as well as their willingness to remain positive and encouraging when their peers are struggling. 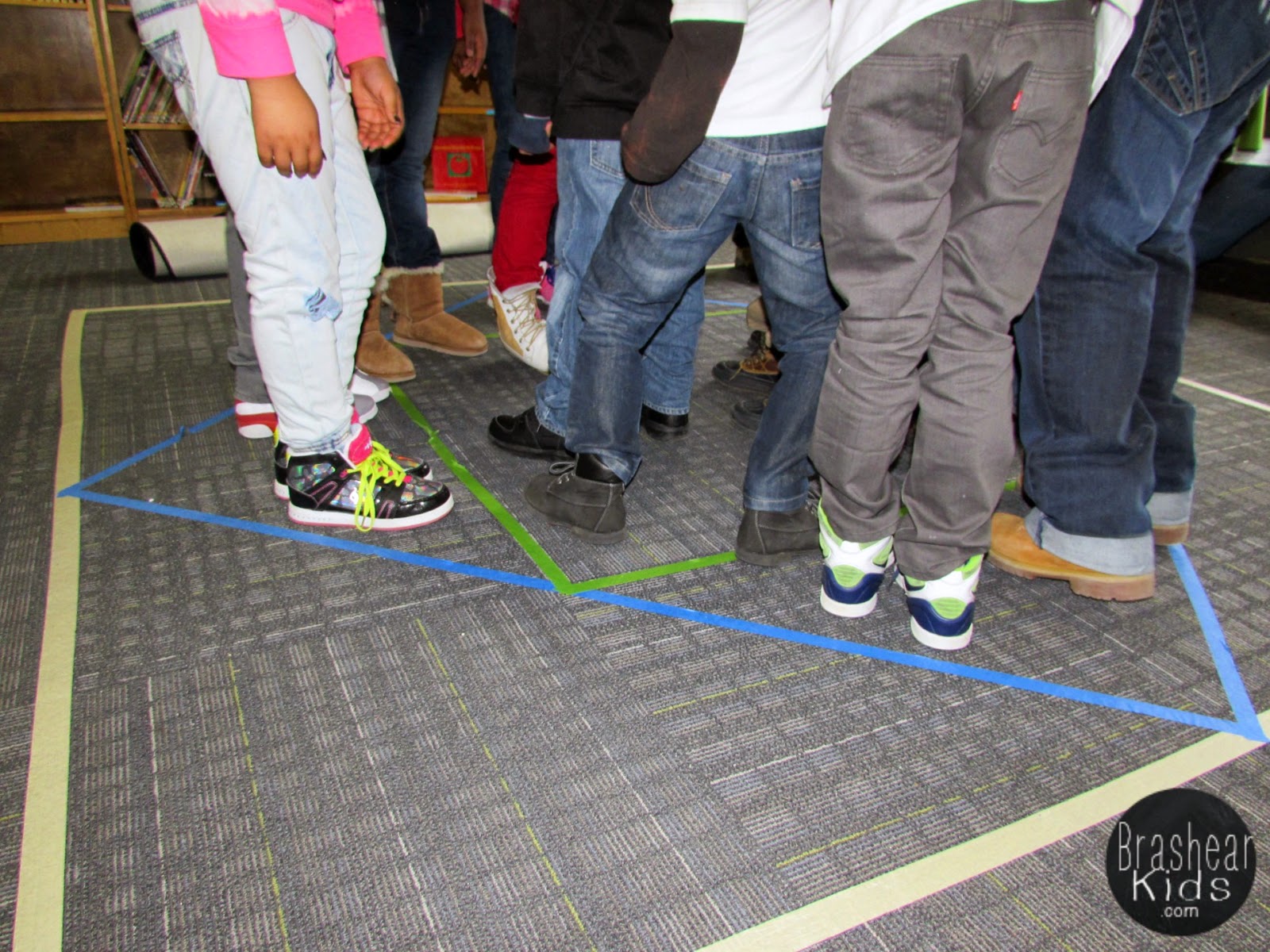 2) SHRINKING CIRCLE
This game has taken on many different forms at camps and youth programs, but ours was just a simple set of nested squares taped on the floor. The challenge here was for the group to be tolerant of one another and work together to get through the activity. The game began with the kids standing outside of the white, largest square. After getting a good look at the arrangement of squares, they were asked to all stand within the largest square. They managed that without only a bit of muttering about personal space. Next, I asked them to stand inside of the blue, middle square. At this point, the kids started to feel the squeeze. Despite some minor conflict, we pressed on for the final square. The first attempt was a disaster. Trodden toes and other disputes devolved into shoving and the group had to separate themselves to rethink their approach. 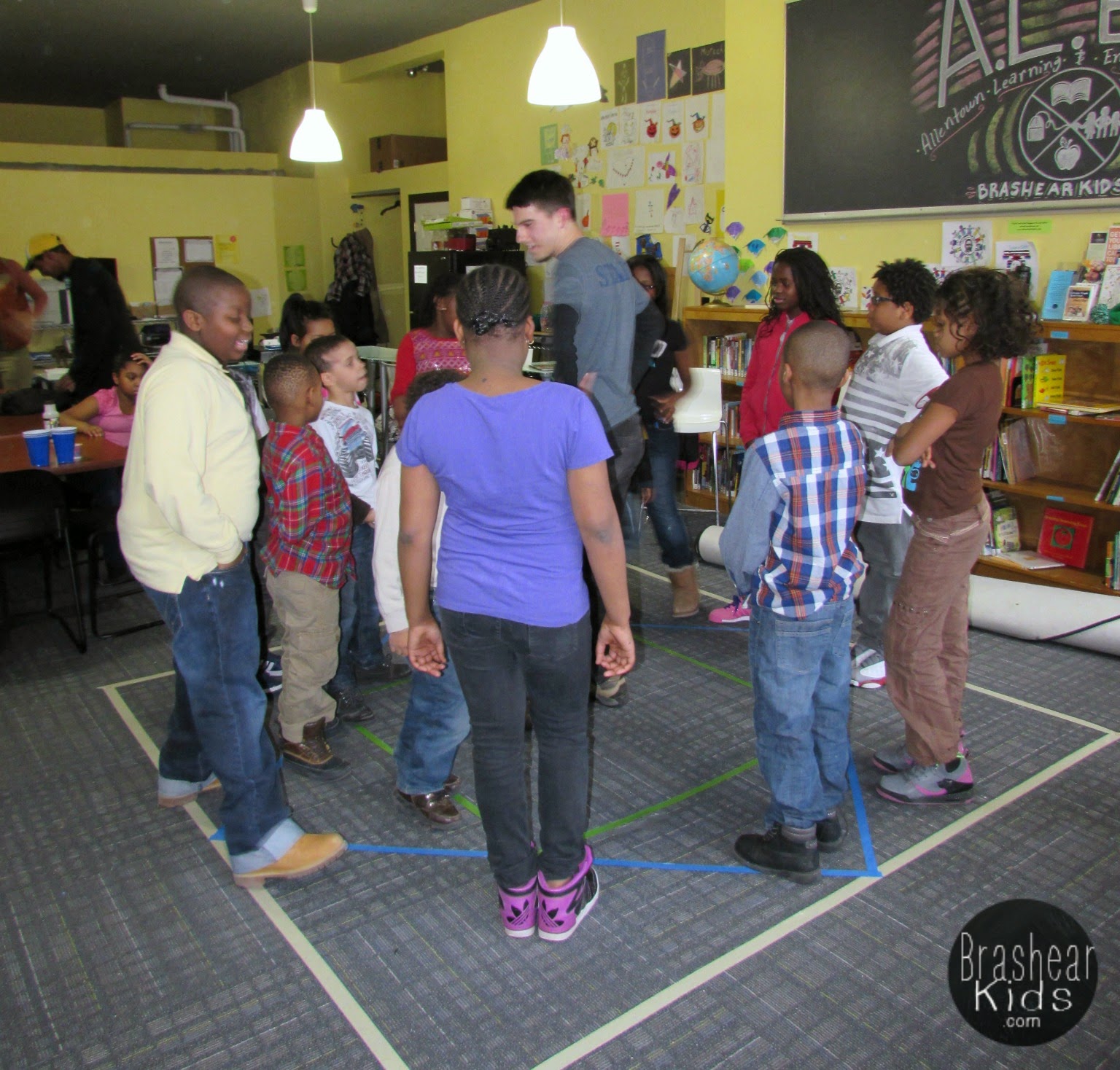 After reiterating the day's message of teamwork and cooperation, the group came together for another attempt. The group came together quickly, crowding inside the green tape outline of the smallest square. After holding the pose for a few seconds, the huddle flew apart to celebrate victory. 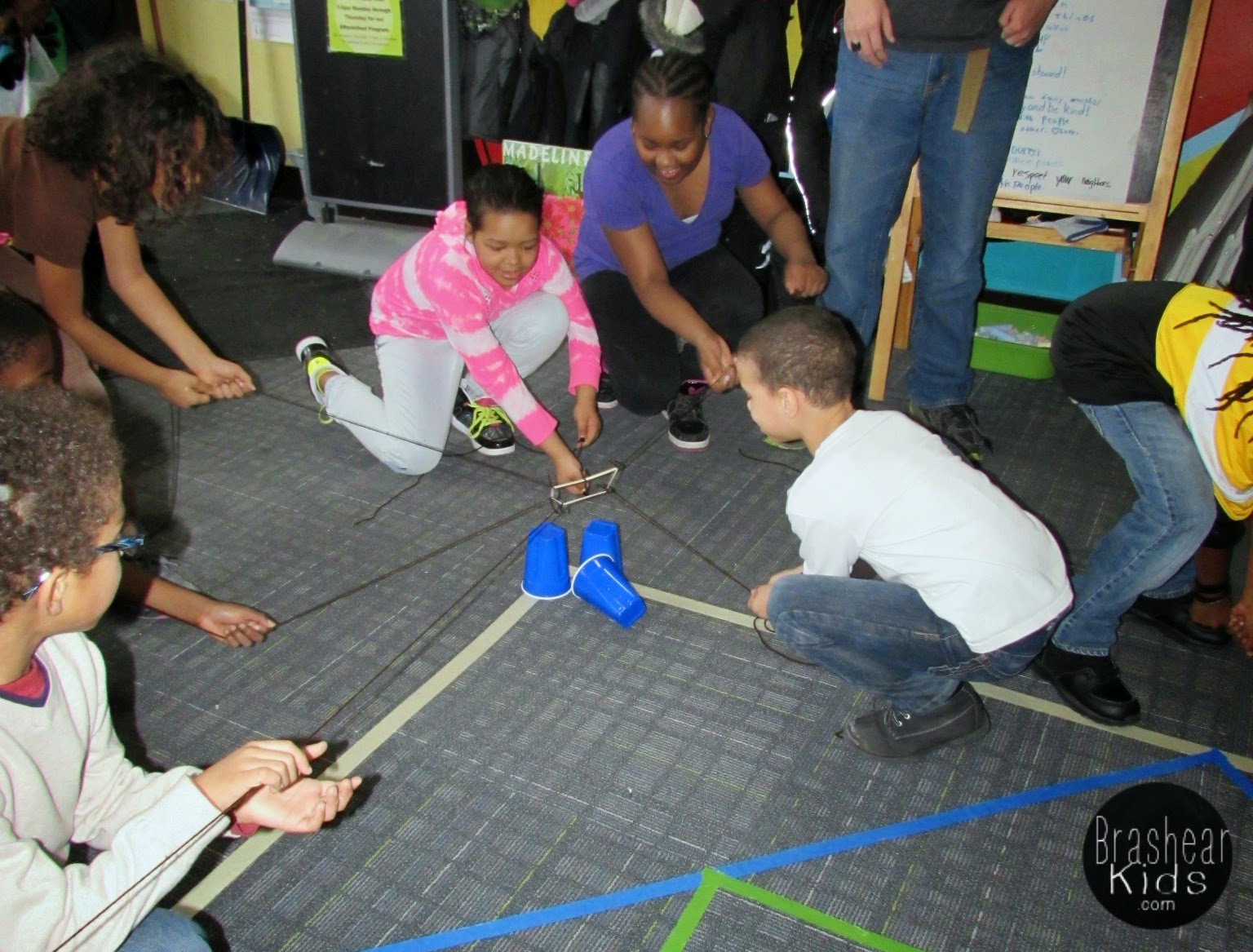 3) RUBBER BAND RELAY
The final game is another popular one, with variations floating around throughout the blogosphere. This particular incarnation divided our group of students into two teams, each tasked with disassembling, transporting, and reassembling as stack of cups without touching them. Instead of using their hands, each team has to work together to operate a crane-like rubber band apparatus made of a rubber band with equal lengths of yarn tied around like spokes. To open the rubber band wide enough to grasp a cup, the team must all pull outward in concert, keeping it centered over their target, and lower the rubber band onto the cup without tipping it. To relocate the stack, teams needed to communicate effectively and coordinate their movements. The task required a lot of do-overs for each group to get the hang of the activity and complete the relay. This activity, the group decided, was the hardest one but also the most fun for everybody since everyone could take part the whole time.

- John
Posted by John at 1:29 PM
Email ThisBlogThis!Share to TwitterShare to FacebookShare to Pinterest