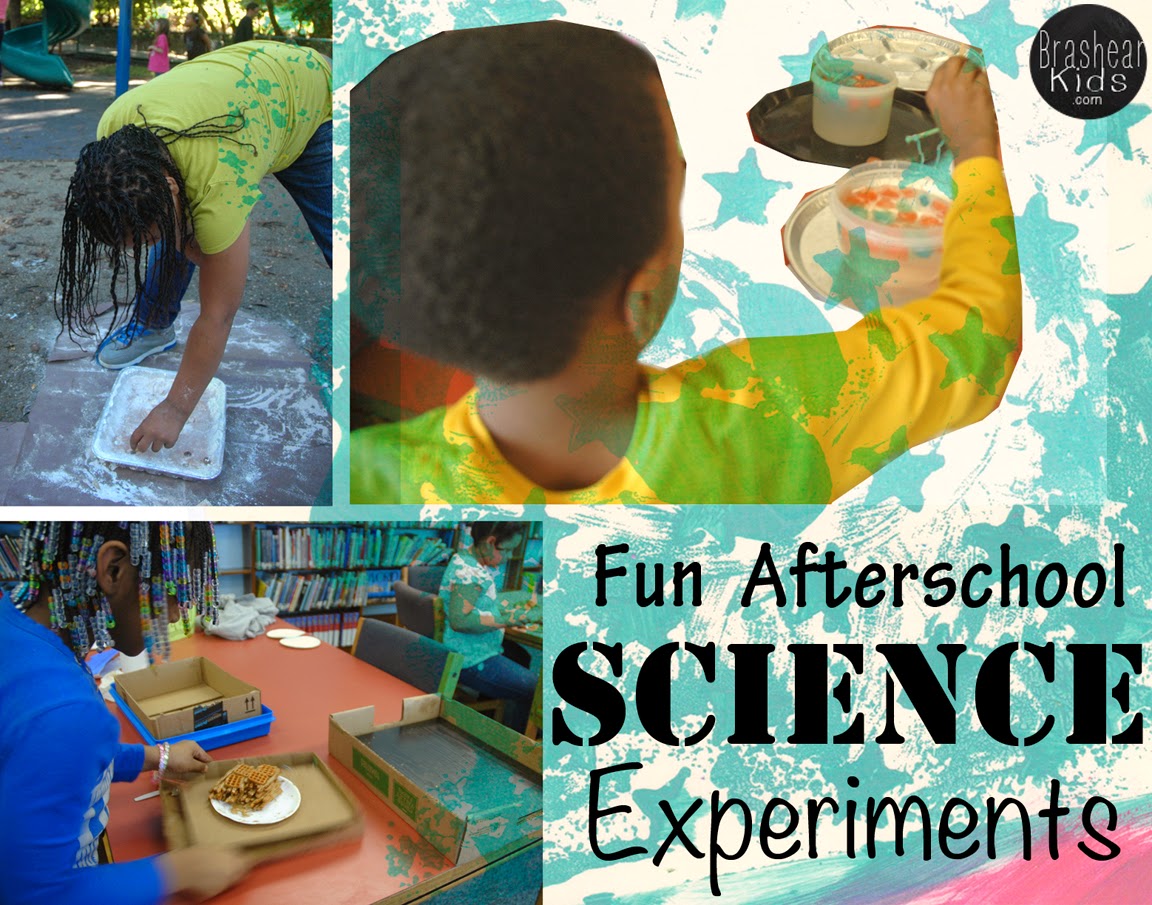 Some of our favorite afterschool activities in the 2nd and 3rd grade class at Allentown Academy were science experiments. We used simple, inexpensive materials to find out amazing things about ice, astronomy, life science, earthquakes, buoyancy, and the pH scale. The students were eager to engage in all of these hands-on experiments! 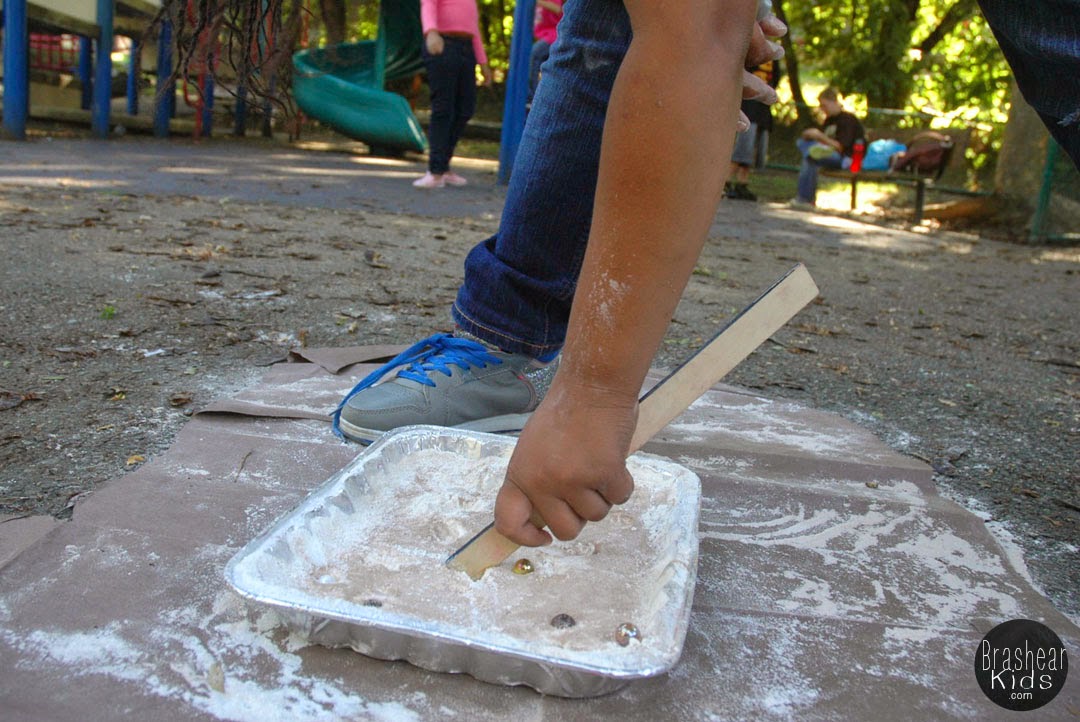 One of our first experiments was about the impact of meteors on the surface of the moon. We simulated a moon surface with a pan full of flour, lightly dusted with hot cocoa mix. Students took turns dropping marbles from different heights and measuring the holes they made. Read more about the experiment on our Astronomy Day blog post! 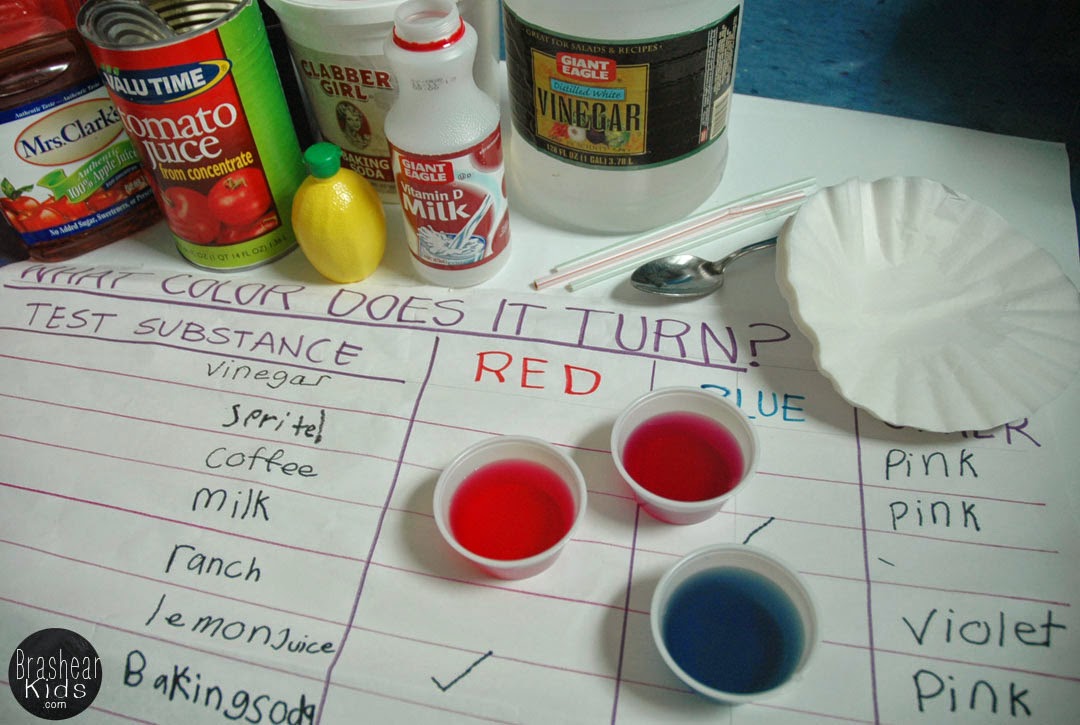 Our next experiment is a perfect experiment for autumn, when students might be noticing the leaves changing colors. This experiment was all about the pigments found in plants... specifically, Anthocyanins, the pigments that make cabbage red, blueberries blue, and autumn leaves change color. You can make a natural pH indicator out of boiling red cabbage and saving the juice. In our class, we had sample cups of many different kitchen items: vinegar, baking soda, coffee, milk, lemon juice, and some fun others like ranch salad dressing and lemon-lime soda. Students tested the pH of each item by pouring some of the cabbage indicator into the test substance. When a substance was acidic, it would turn red. When it was basic, it would turn blue. And if something didn't change color or stayed in the middle, it was neutral. Students truly became curious chemists and marveled at the color changes. 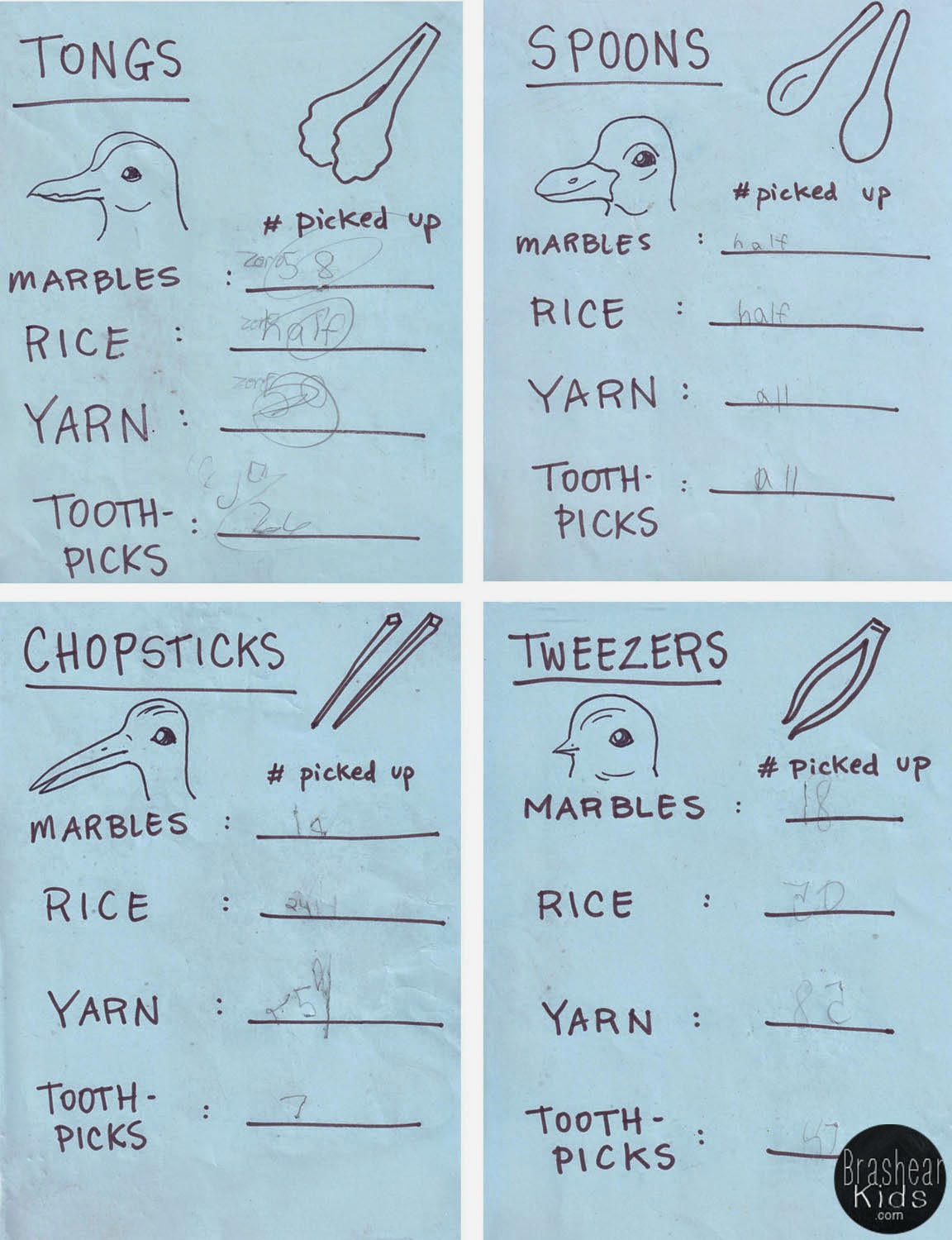 Another experiment was all about birds and the shapes of their beaks. We examined how the shape of a bird's beak can help it gather different types of food. We had four tools to simulate beaks: salad tongs (seagulls), two spoons (ducks), chopsticks (herons), and tweezers (chickadees). The food options were marbles, rice, yarn pieces and toothpicks, to represent different berries, seeds, and worms that a bird might eat. Students divided into teams according to tool/beak type. They raced against each other to see how many food pieces they could gather in a minute. The competition was fierce among the bird experimenters, and they could clearly see that some bill types just didn't fit certain food sources. 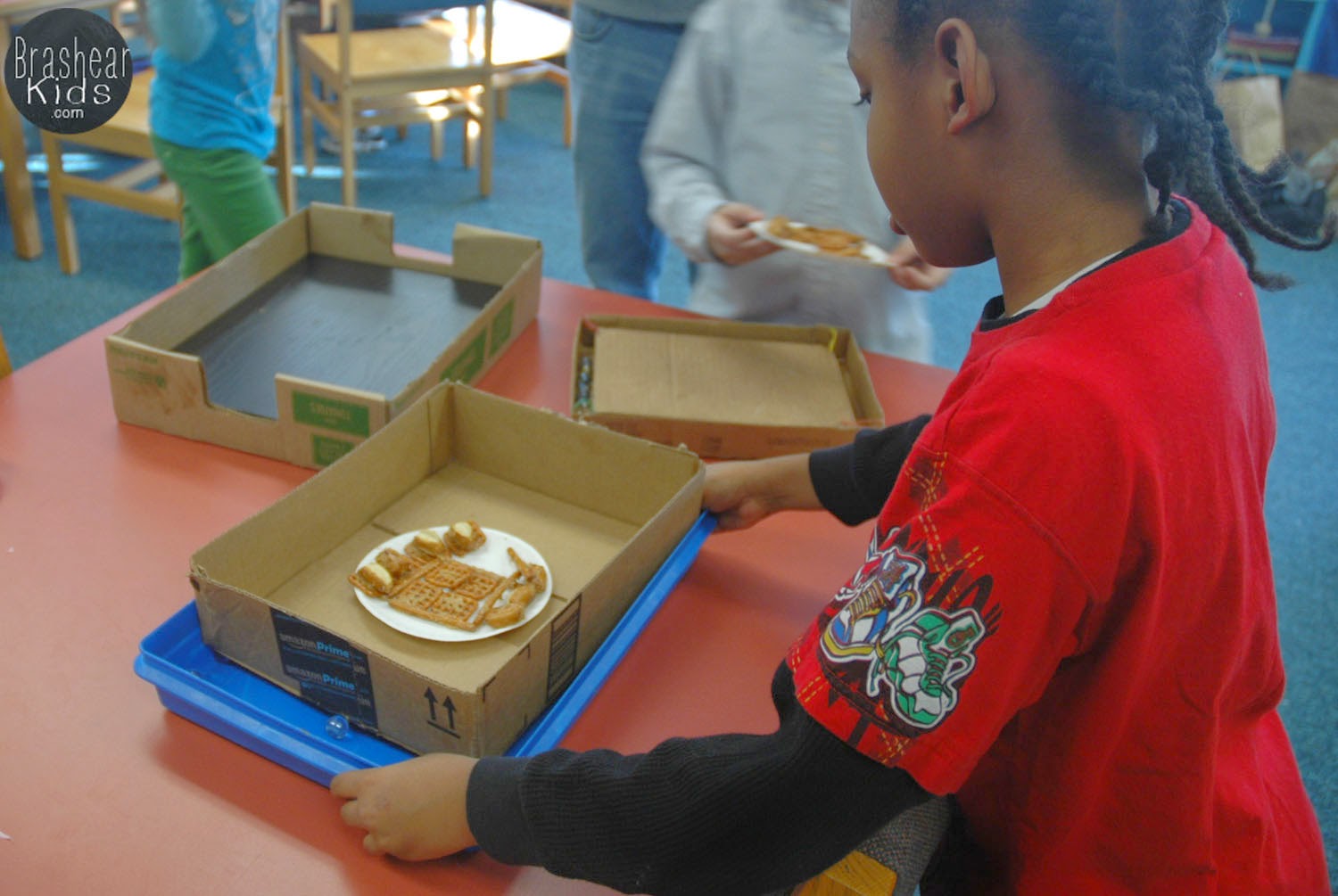 We moved on to a little bit of earth science, and learned about earthquakes! After seeing a slideshow about plate tectonics and how engineers design homes to be earthquake safe, students got the chance to put their own building designs to the test. They constructed houses out of pretzels and peanut butter, and then tested them on homemade shake tables. This experiment has its own DIY... read about more about it here! 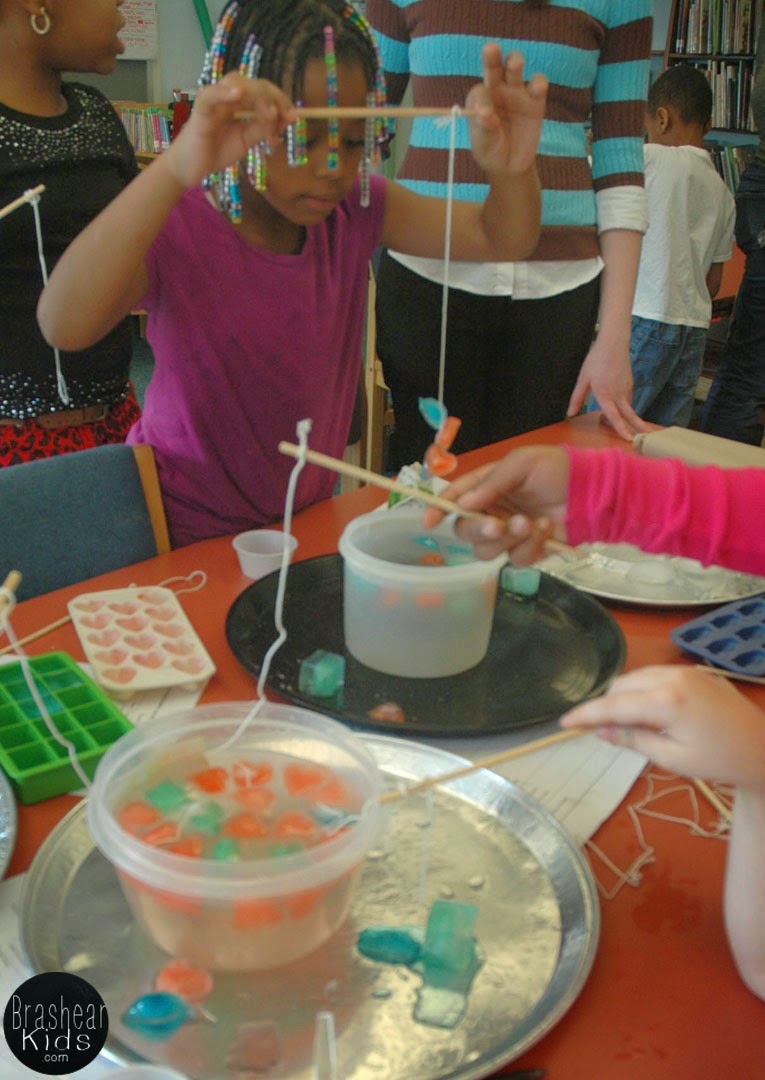 During the height of winter, we did several experiments about ice. We took a look at what substances melt ice the best. Most popular, though, was Competitive Ice Fishing! I made ice cubes of different shapes and colors, using food coloring and fun molds: green cubes, red hearts, and blue penguins. Each student was equipped with a little fishing pole, a wooden dowel with a bit of string tied on the end. The ice cubes were dumped into a bowl of water. The string of the fishing pole was brought to touch the surface of the desired cube, and some salt was sprinkled where string touched ice. You count to twenty, and then lift your pole. Like magic, the ice adheres to the string and can be lifted out of the water! The ice cubes were worth different points... students competed to see how many ice cubes they could catch at once on a string. One student even managed to catch six cubes on her string! 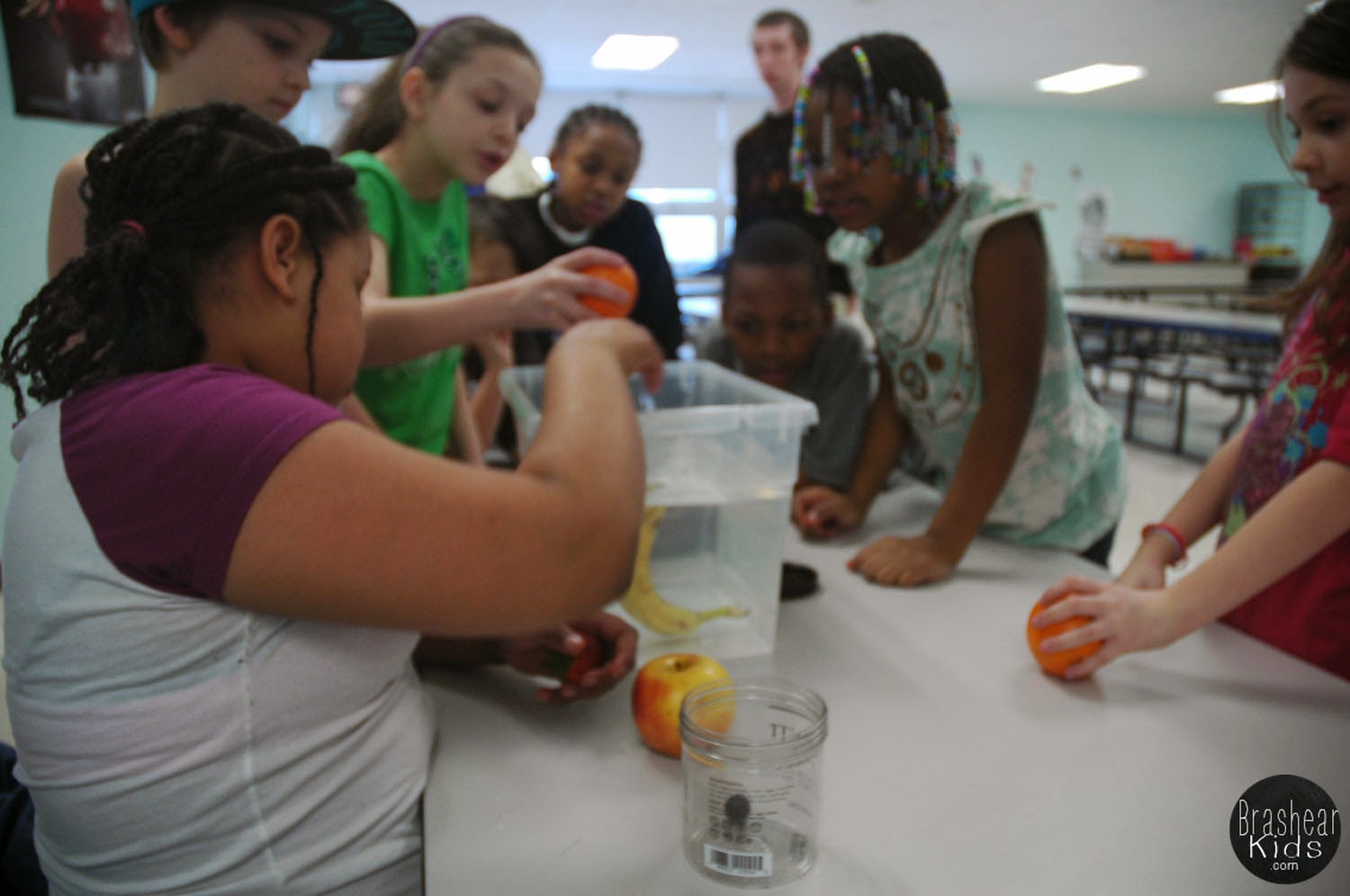 Our final experiment was about fruits: which sink and which float? Some of the results might surprise you! We filled a clear test tub with water and took turns dropping the fruits in. Before each fruit was dropped, we took guesses about whether it would sink or float. Students became adept at guessing the fate of the fruit. We tested bananas, strawberries, apples, grapes, blueberries, oranges, lemons and limes. Citrus fruits were especially fun because they can differ according to its peel status. For example, an unpeeled orange will float, but a peeled orange will sink. This is a great introduction to buoyancy and density. We had interesting conversations about the purpose of the parts of fruit. And afterwards, we cut up the test subjects and had a marvelous fruit salad!

-Laura
Posted by Laura Ramie at 9:03 PM
Email ThisBlogThis!Share to TwitterShare to FacebookShare to Pinterest