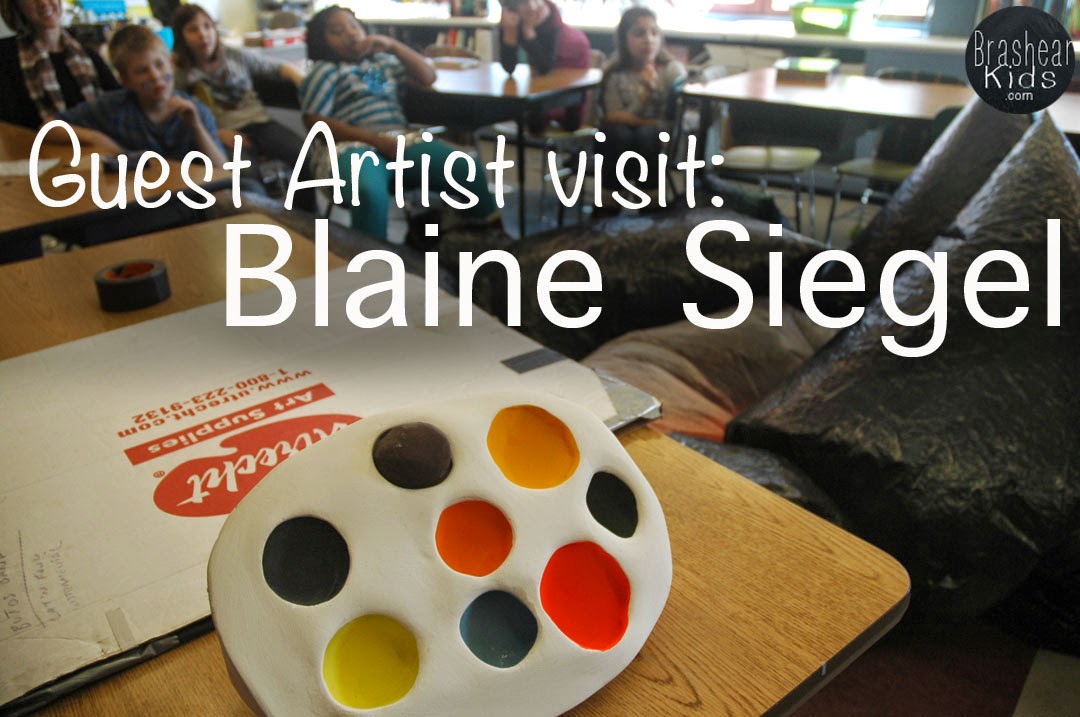 Our New Artists class at Phillips Elementary is still talking about our amazing visit from artist Blaine Siegel. He captured our attention by his engaging presentation and intriguing art philosophy. Blaine Siegel is an artist who practices several disciplines, including installation, sculpture, drawings/paintings, and video. Most astounding, though, was when he turned our classroom into an installation space. 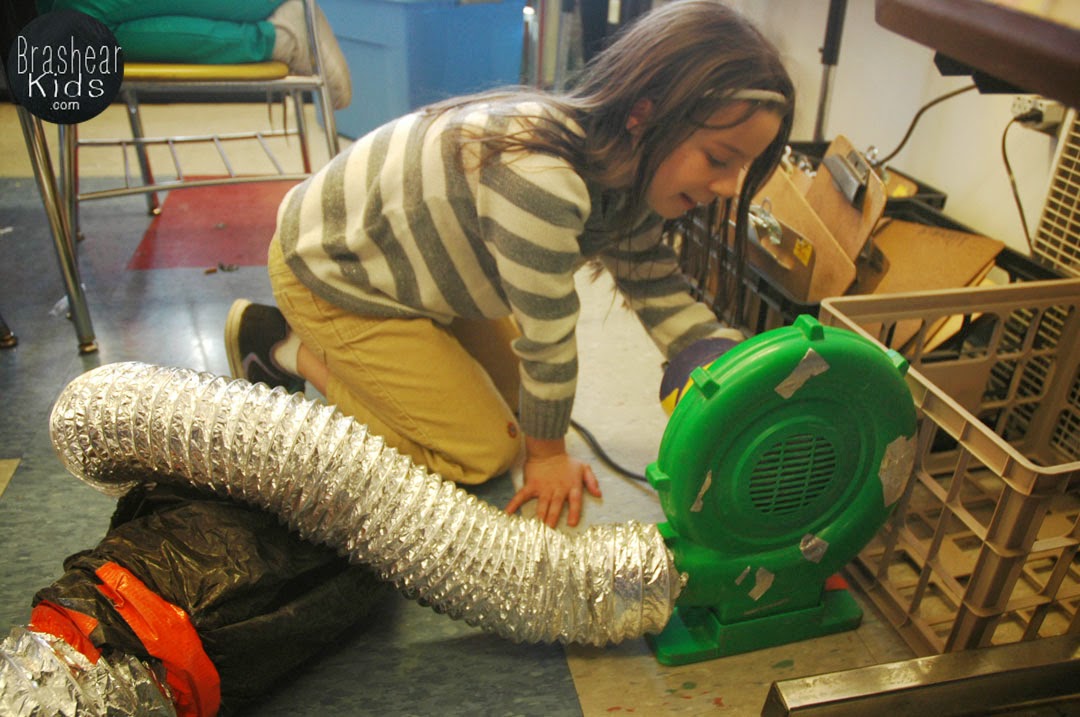 Students instantly knew something was different when they entered the classroom. Blaine altered our space before we arrived by strewing garbage bags and crinkly aluminum ducts on the floor.  Our New Artists were put into a curious, inquisitive state of mind, which was appropriate for the spectacle Blaine was about to show us... 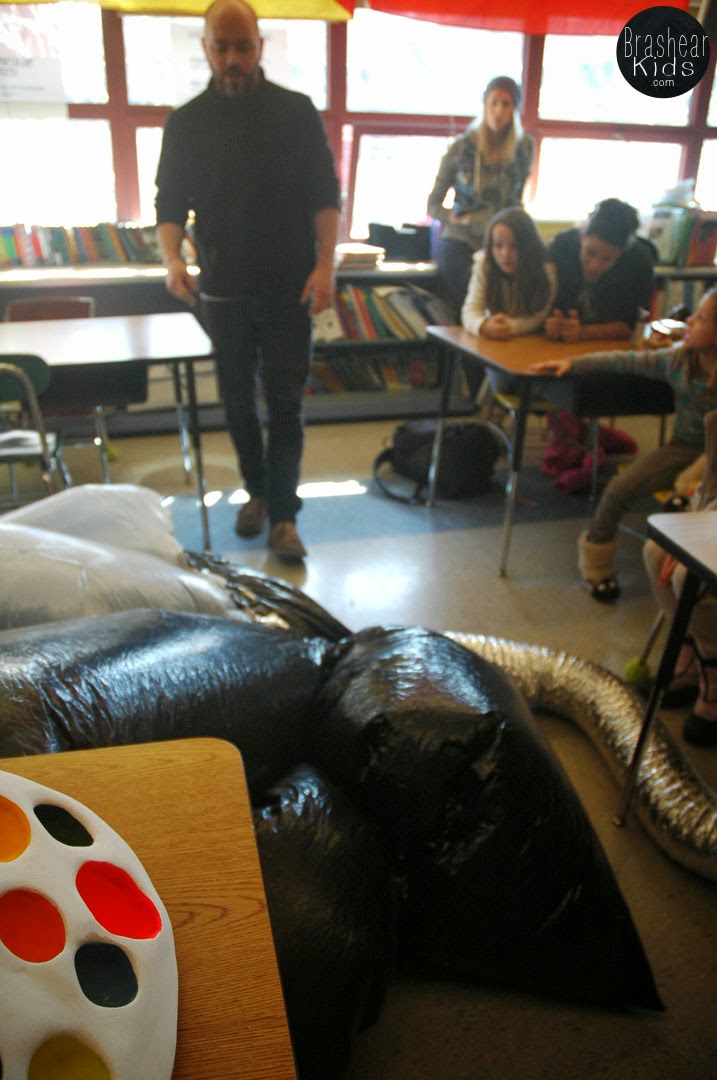 He had one of our students switch on a motor, which pumped air into the ducts and began to inflate the mysterious garbage bags. We realized that the bags were melded together, as an otherworldly structure began to form. The students looked on in fascination as they witnessed a kinetic sculpture take shape. 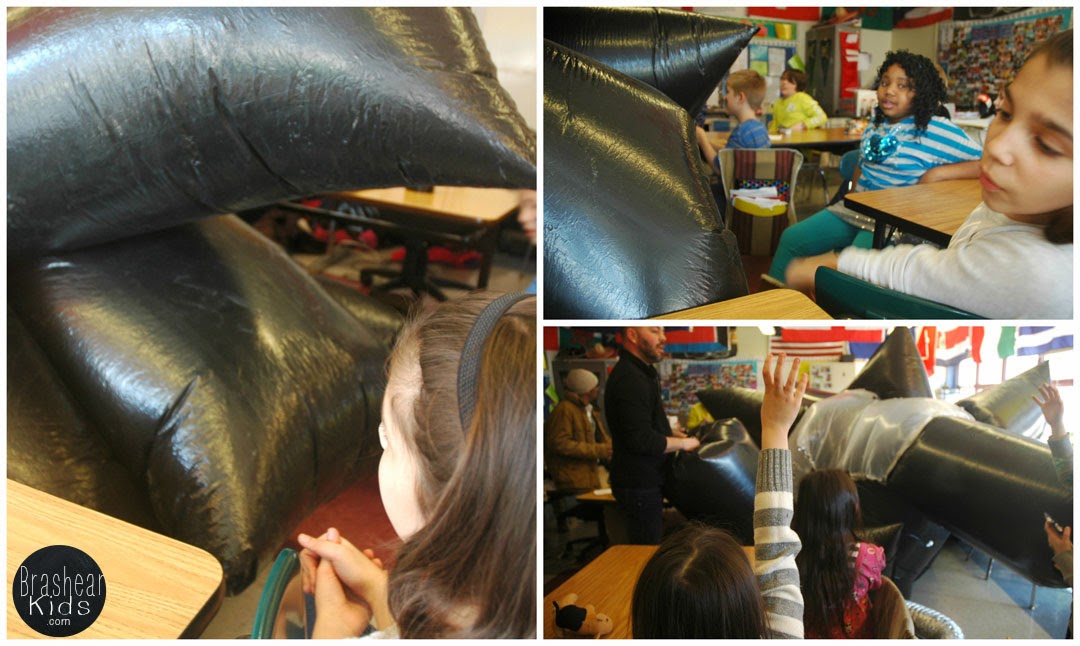 Blaine shared with us his conceptual interests as the sculpture continued to grow. This gives testament to his engaging presence, because despite being really excited by the plastic bags taking over the room, our students were still listening and engaged. 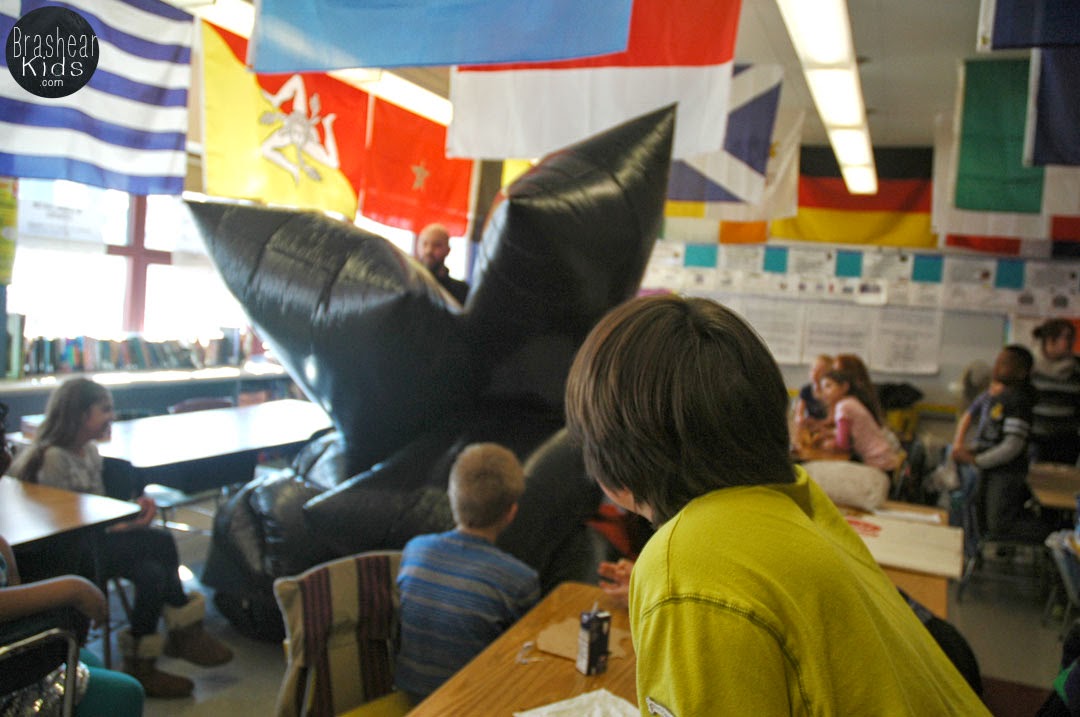 Blaine discussed his use of recycled materials, impermanence and he taught us a new word to further describe his projects: "quotidian," which describes materials that are everyday and ordinary. His installations breathe life into everyday objects that people would usually throw away. What is more quotidian than garbage bags, after all? And yet, they are transformed when fused and inflated and presented as sculpture. 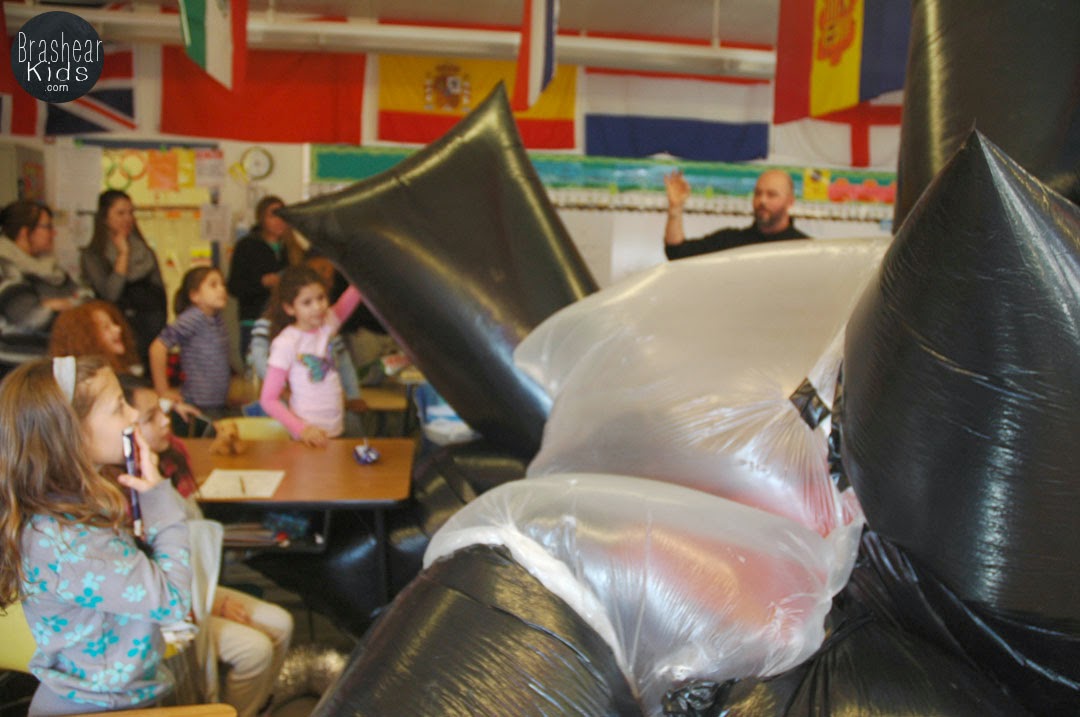 The aesthetic properties of the sculpture were revealed as it reached its capacity, filling up a sizable portion of the room. Black trash bags were contrasted with white plastic bags and sections of bubble wrap. Stretched taut, the bags made intriguing shapes and textures. "What does it look like to you?" Blaine asked us. House, grapes, a blackberry, a sea creature, a microbe... the amorphous sculpture brought all sorts of associations. It even became an interactive piece when Blaine invited a student to enter it and hop around inside. 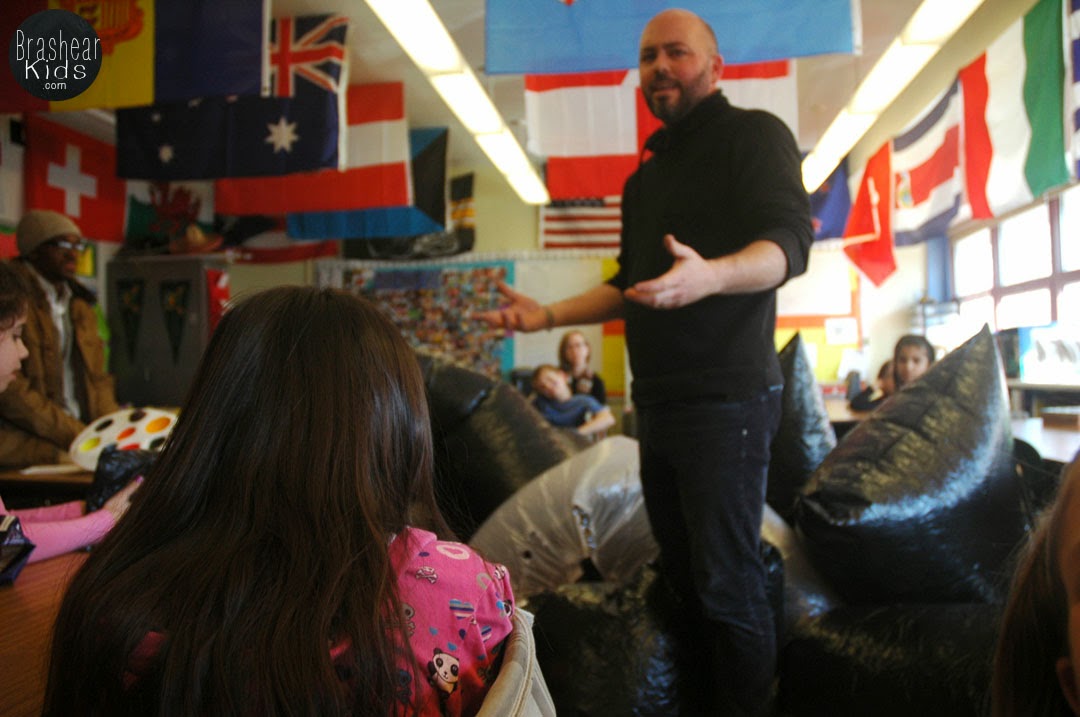 After enjoying the sculpture, it came time to deflate it. As the bags shrunk down, Blaine explained that he made this piece in reaction to the plastic bags choking the ocean. He referenced the Trash Vortexes, the infamous patches of marine debris that collect because of ocean currents. Most of that debris is plastic, which does not biodegrade, but only breaks down into smaller pieces. Thinking about this issue, along with experiencing a recycled kinetic sculpture, makes you think twice before discarding a plastic bag. 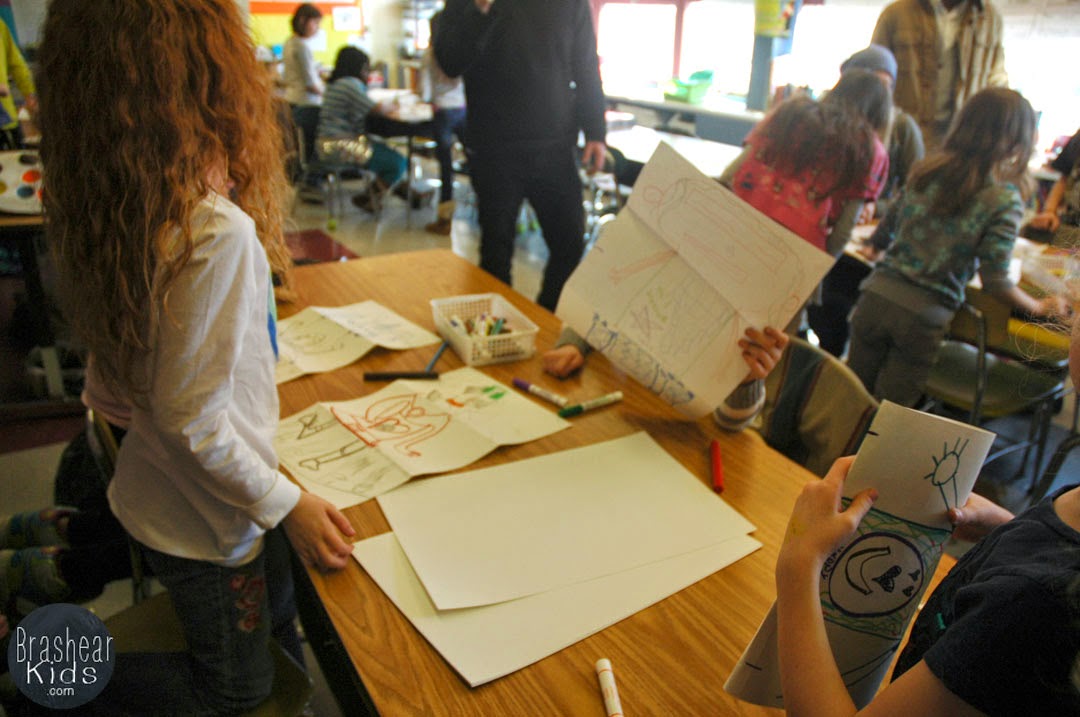 Blaine shared with us another sculpture he brought, one that was plaster and charmingly painted with brightly colored dots. He told us that he had been inspired to make it from a drawing that his daughter made. Blaine also showed us some of his 2D work and described an animation project he was currently working on. To further enhance his presentation, Blaine introduced a collaborative, chance-based art project to the class. We made Exquisite Corpses, a classic drawing exercise made popular by the Surrealists. 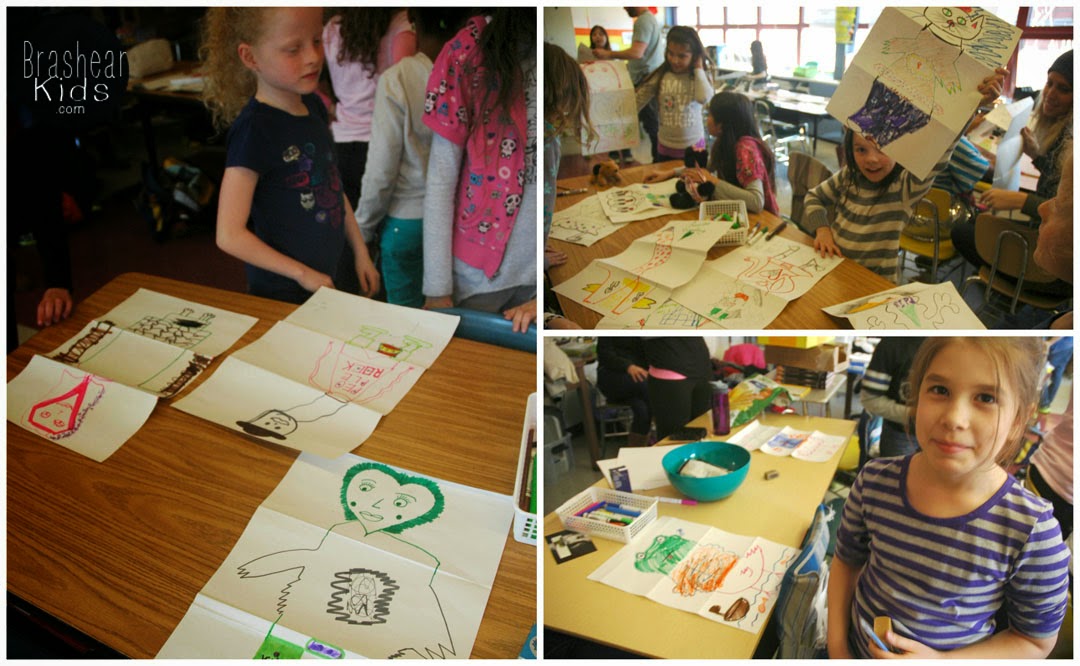 Even the adults were invited to join in and draw sections of the collaborative creatures. After making the drawings, we went around and looked at them and giggled at the strange combinations. It was a jam-packed day at New Artists... we are very grateful to Blaine Siegel for transforming our classroom for an afternoon!

-Laura
Posted by Laura Ramie at 11:48 AM
Email ThisBlogThis!Share to TwitterShare to FacebookShare to Pinterest