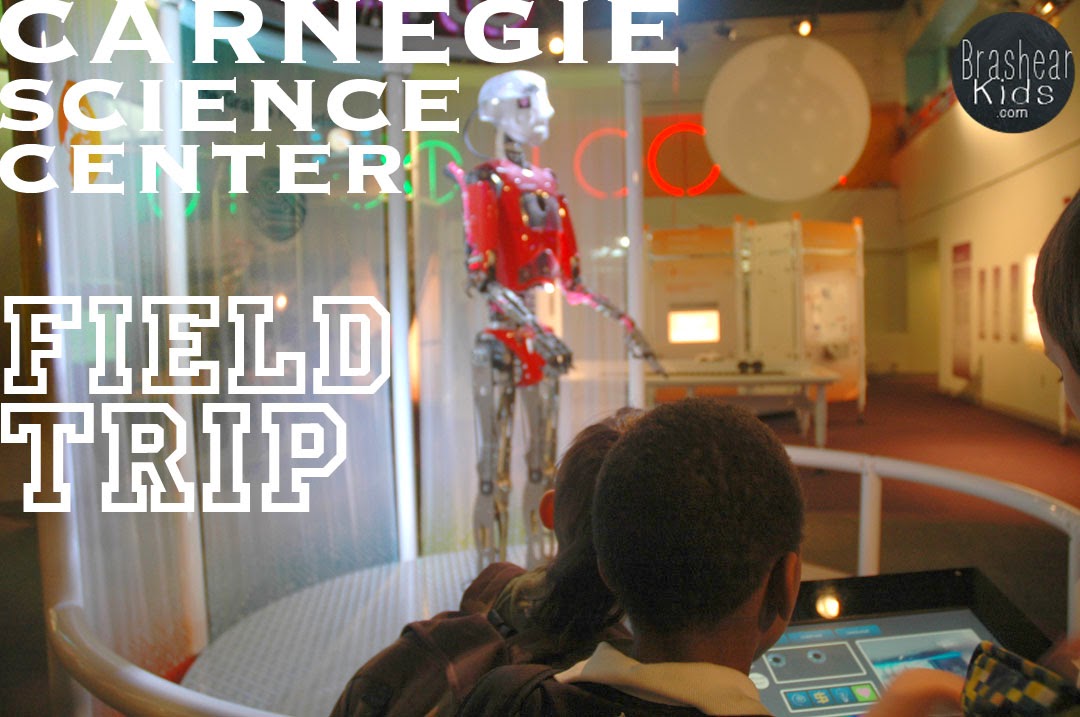 Thanks to Eat'n Park, last month the 2nd and 3rd graders made it out to Carnegie Science Center for an afterschool field trip! Going to the Science Center was a dazzling experience. We went with the purpose of learning about food at one of The Kitchen Theater shows. 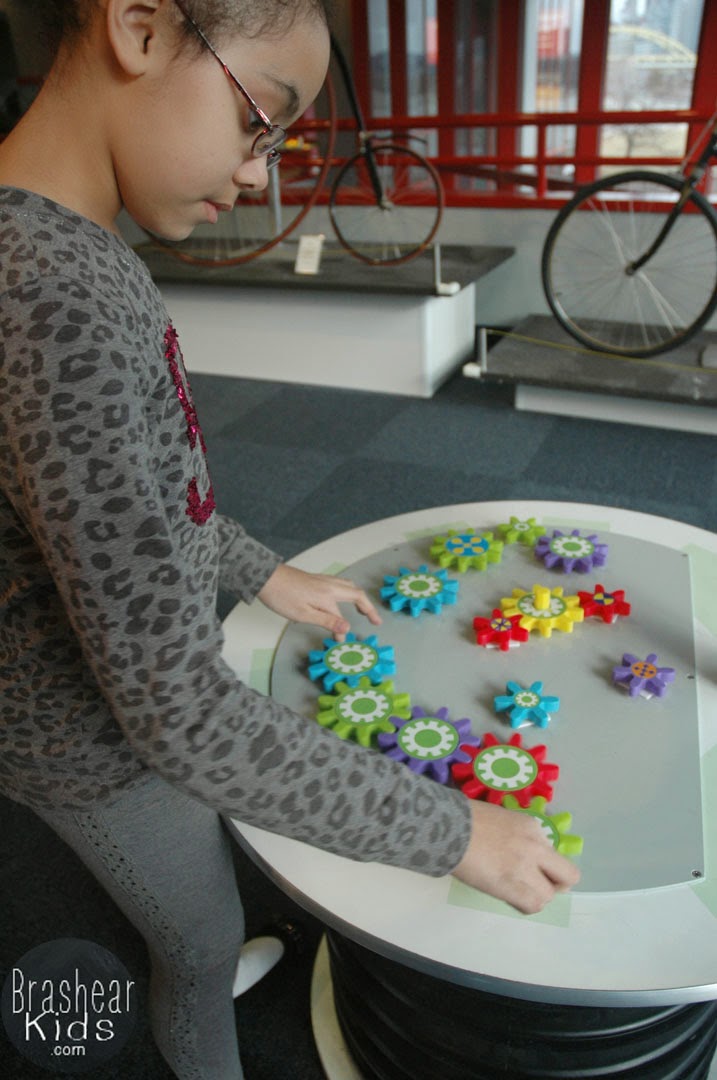 Before the show started, we got to check out some of the exhibits. One of the exhibits we saw was "BIKES: Science on Two Wheels." The students were excited to see bicycles from way-back-when, such as the Penny-Farthing. Students also took turns riding a green tricycle and making gears turn at the gear table! 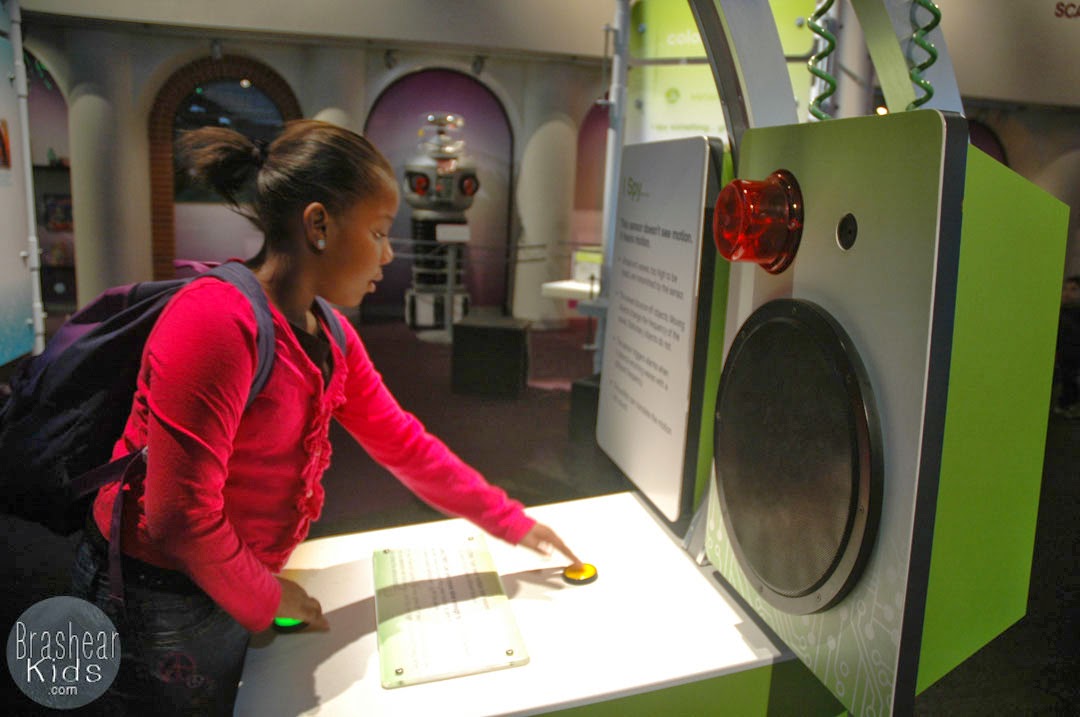 Another popular attraction was Roboworld! Our students darted from station to station, playing air hockey and shooting basketballs with robots. At the start of the exhibit, we were greeted by Andy, the RoboThespian. We also got to make digital doodles and watch as a spider-bot rapidly recreated the sketch with tiny marbles. But the best was yet to come... 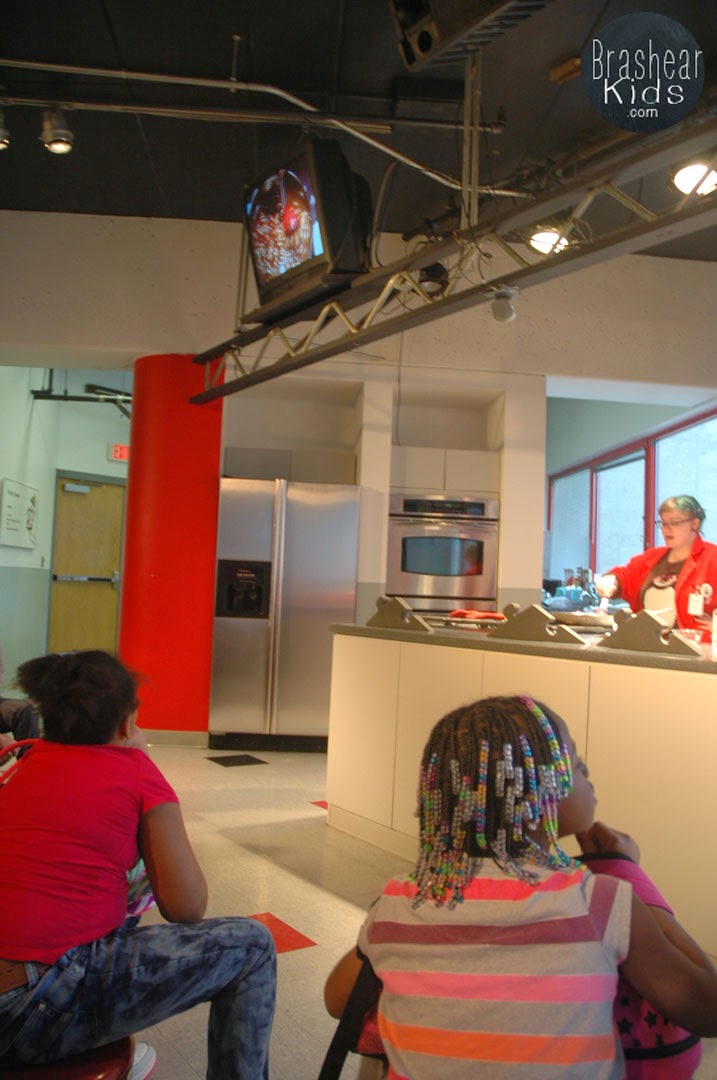 It was time to see the magic of Kitchen Theater! We were given front row seats (on fun retro-style spinning stools), and introduced to our spunky Kitchen Theater chef and the topic du jour: Fruit Flambé. 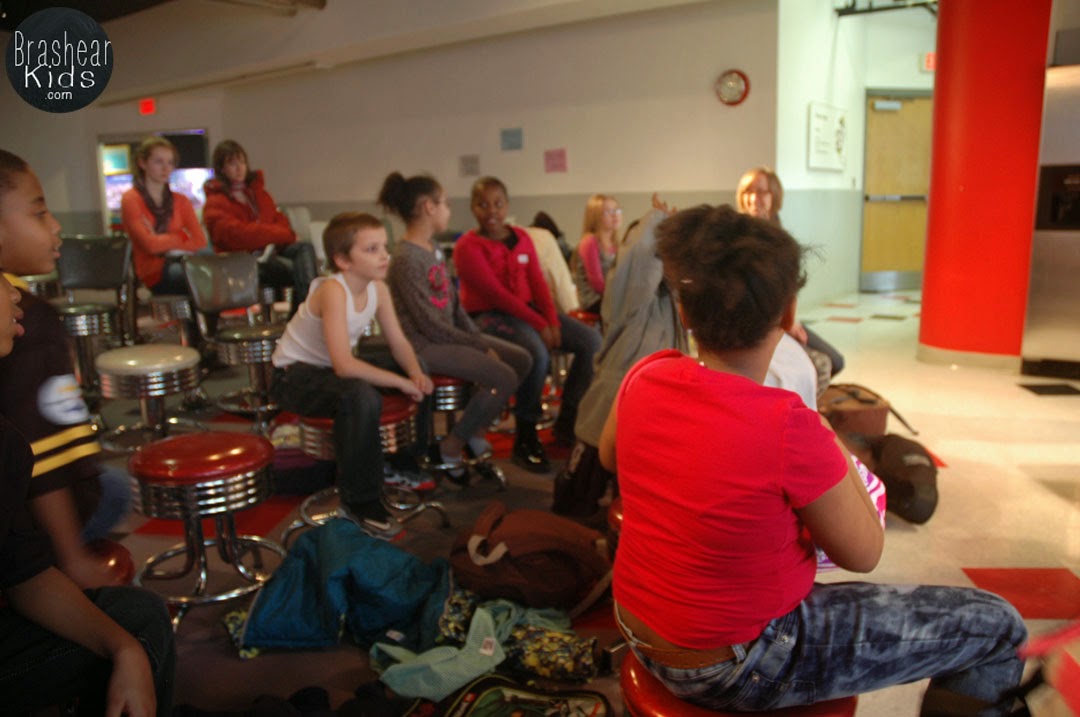 We could watch on large screens as she made a caramel sauce from scratch and taught us the difference between mixtures and solutions. After she made the caramel sauce, she added the fruit we would be using: chopped pear, spiced with cinnamon. Kitchen Theater uses different seasonal fruit and spice combinations for the show, so if you go you might be served something different! 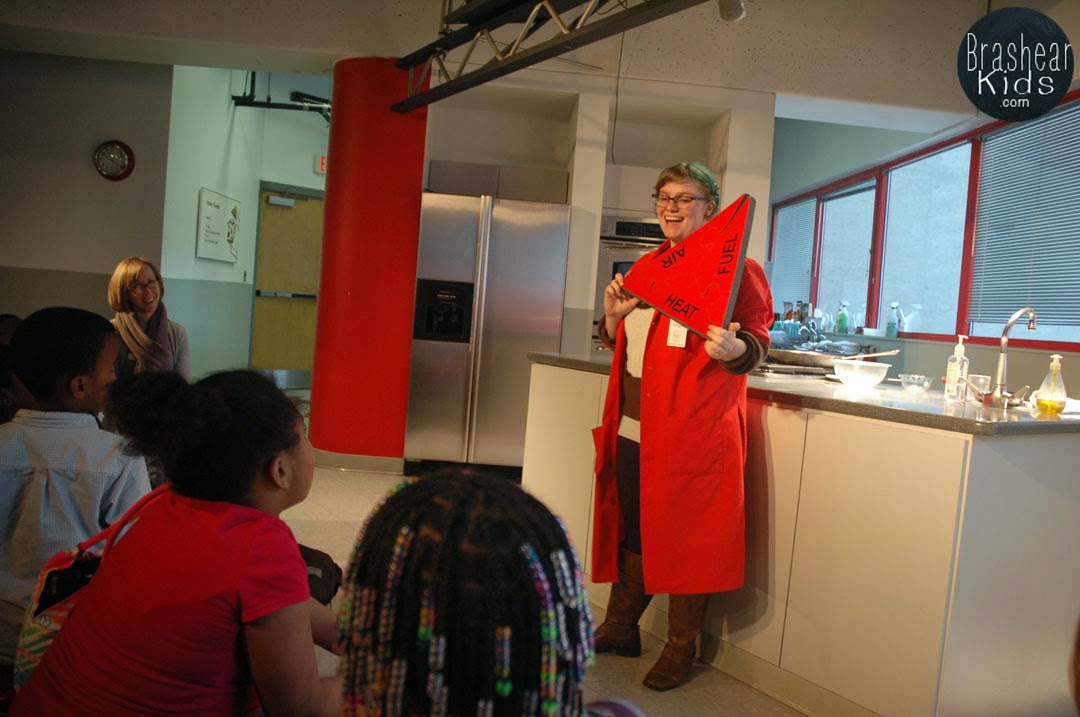 Next, our Scientist-chef asked us about the three ingredients that make fire. Together, we came up with the essential ingredients: you need fuel, heat and oxygen to make a fire. She demonstrated this with puzzle blocks that formed a red triangle. To set our caramel-fruit mixture on fire, we would be using heat on the burner, air in the surroundings, and as an edible fuel... alcohol! 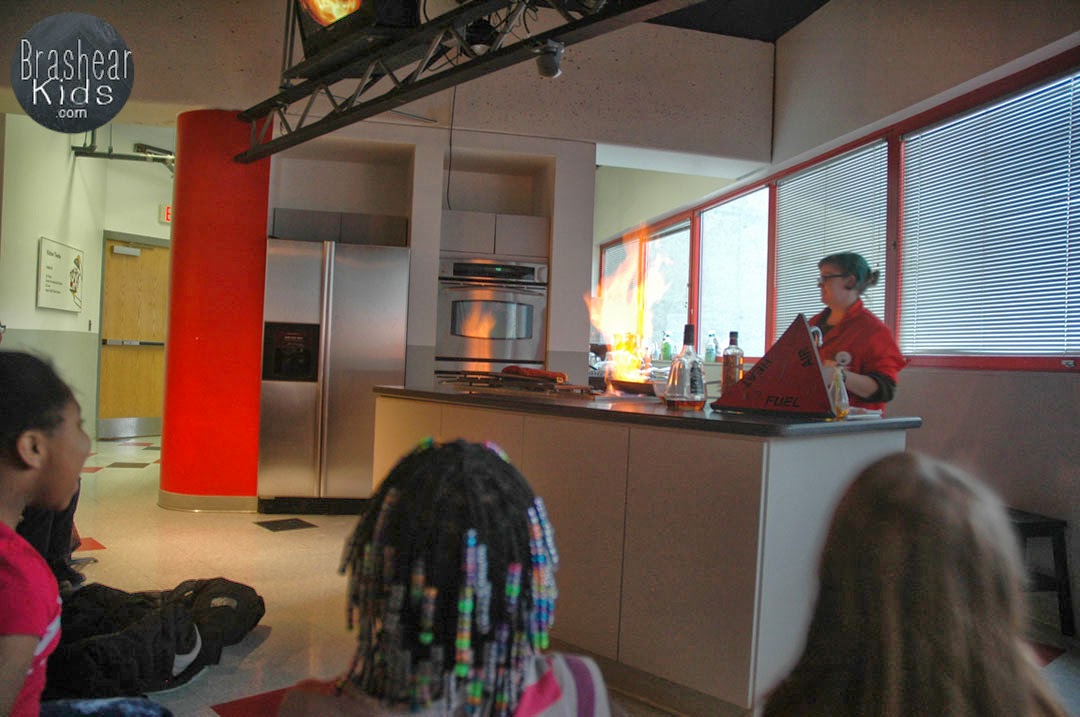 We gaped as dramatic plumes of fire rose from the pan! The chef also explained to us some safety precautions... that it is very important not to pour alcohol straight from the bottle into the pan. Otherwise the fire will crawl up into the bottle and it may explode. Be very cautious if you attempt fruit flambé at home... Kitchen Theater recommends that you use a simmering method instead. 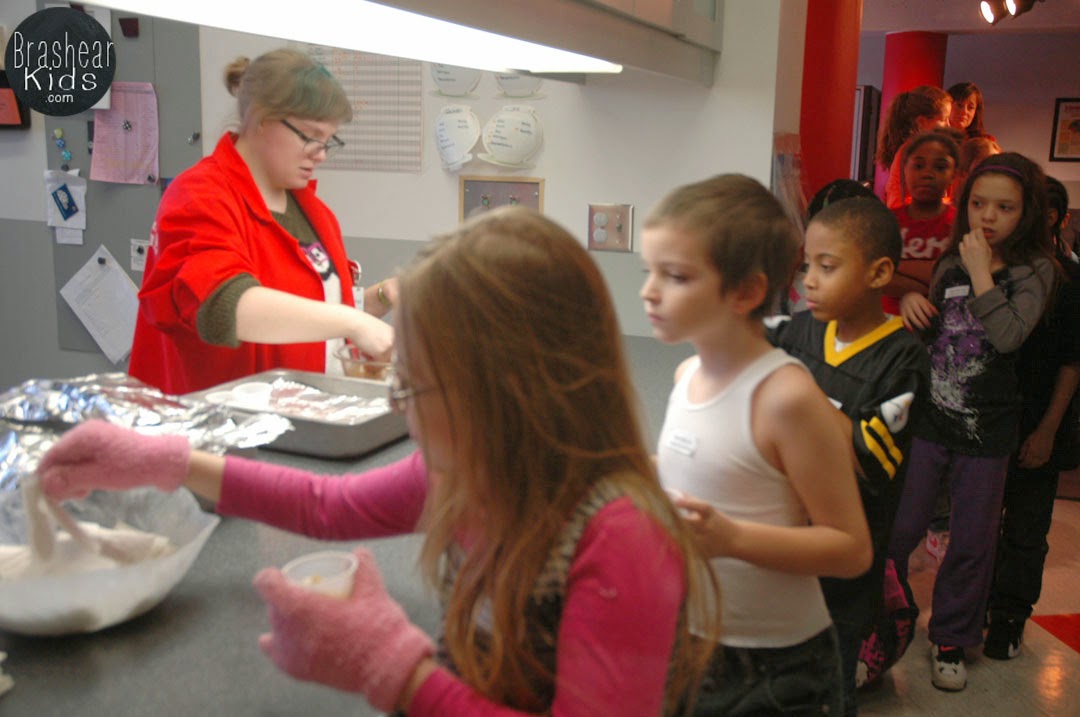 Last came the moment we were waiting for... when we got to try the dish! We learned the French phrase, á la mode, when we were served the flame-touched fruit over vanilla ice cream. Everyone agreed that this was a very delicious treat. After we enjoyed the fruits of our science lesson, we also took the time to recycle our cups and compost our spoons. Thanks to the Carnegie Science Center for showing us an exciting time!

If you are interested in making your own Fruit Flambé, the Carnegie Science Center has the recipes for Kitchen Theater on their website. They make even more tasty suggestions, such as trying fruit flambé with mango and ginger, or even sweet potato flambé! It's definitely worth checking out.

Posted by Laura Ramie at 12:08 PM
Email ThisBlogThis!Share to TwitterShare to FacebookShare to Pinterest