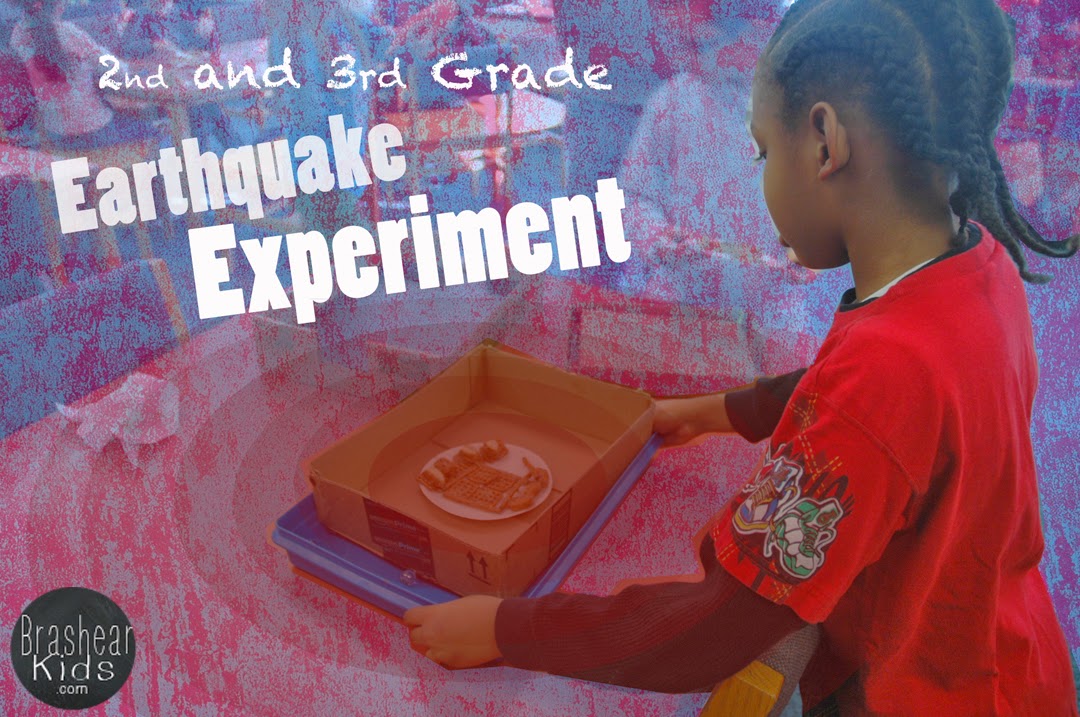 In the 2nd and 3rd afterschool program, we like to do a lot of science experiments. A really successful one has been our exciting Earthquake Experiment. Read on to learn about how we built model structures and tested them on DIY shake tables. 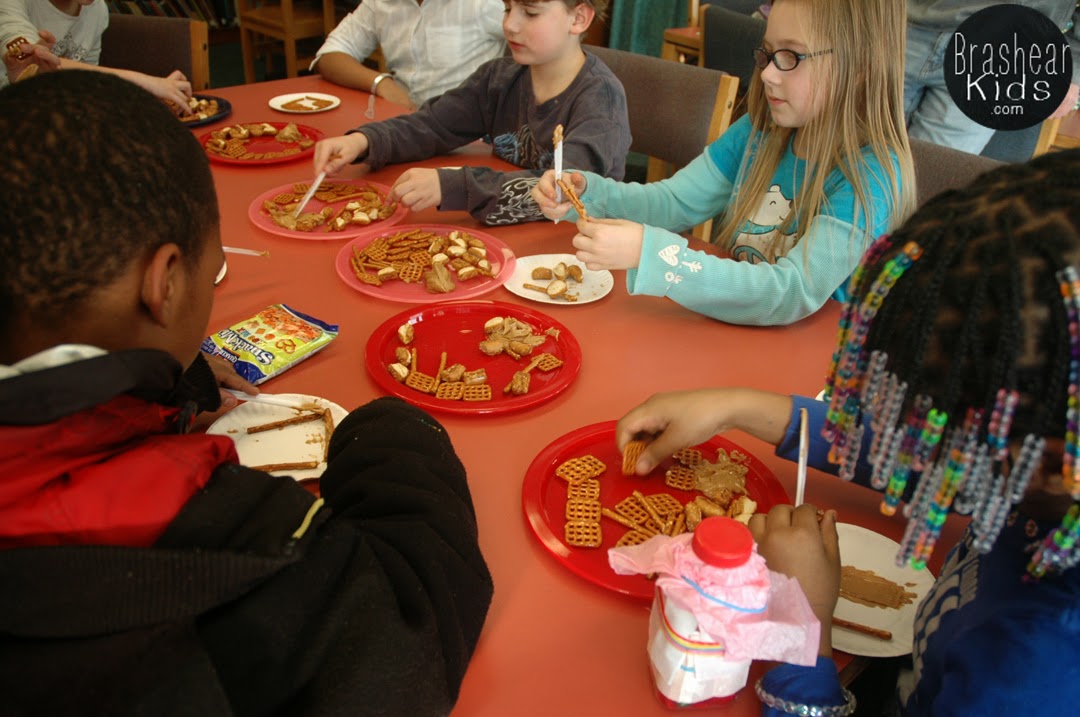 This experiment was inspired by a project on Science Buddies. They have instructions for kids building test houses out of sugar cubes and peanut butter. Since I didn't want to overload my students with sugar, I substituted pretzels as our building blocks. Pretzels are also good because they come in different sizes and shapes. We used pretzel sticks, grids, and rounds. I gave the students ideas on how they might start constructing a house, such as stacking and overlapping the sticks like a log cabin. 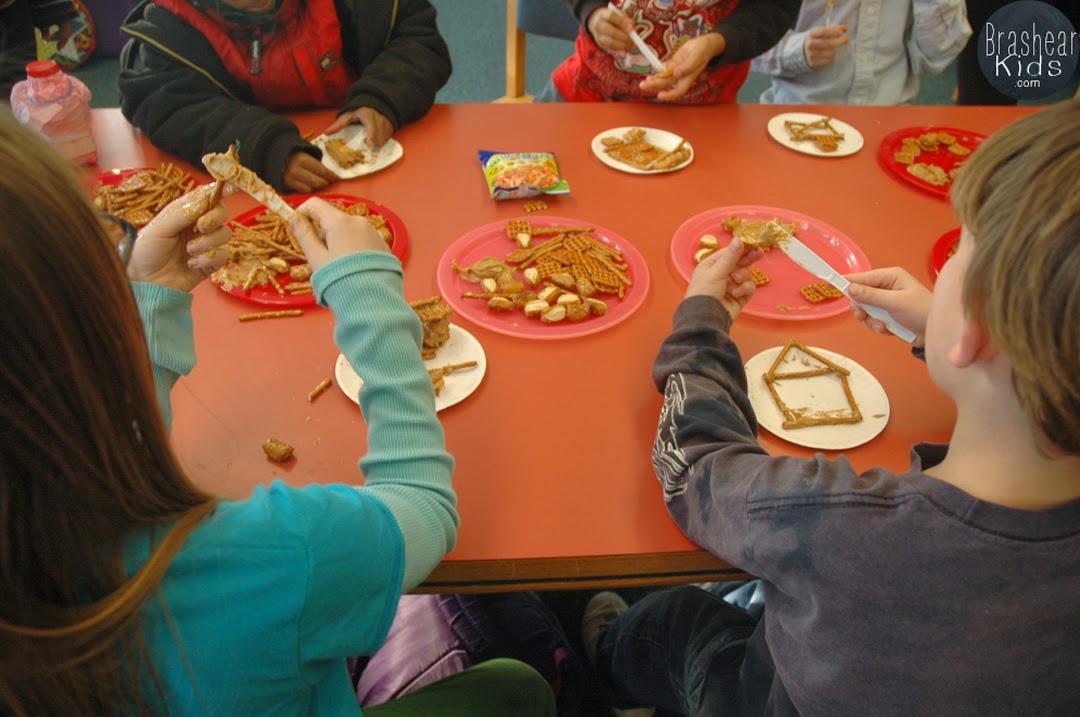 We stuck with peanut butter as our cement, though be sure that you substitute a different food butter if there are allergies in your class. If I were to do this project again, I would also emphasize that the students try to build for height. Instead, many of their houses were short and squat. They still enjoyed the building process. Looks like a pretzel and peanut butter party! Glorious snacking was to proceed afterward. 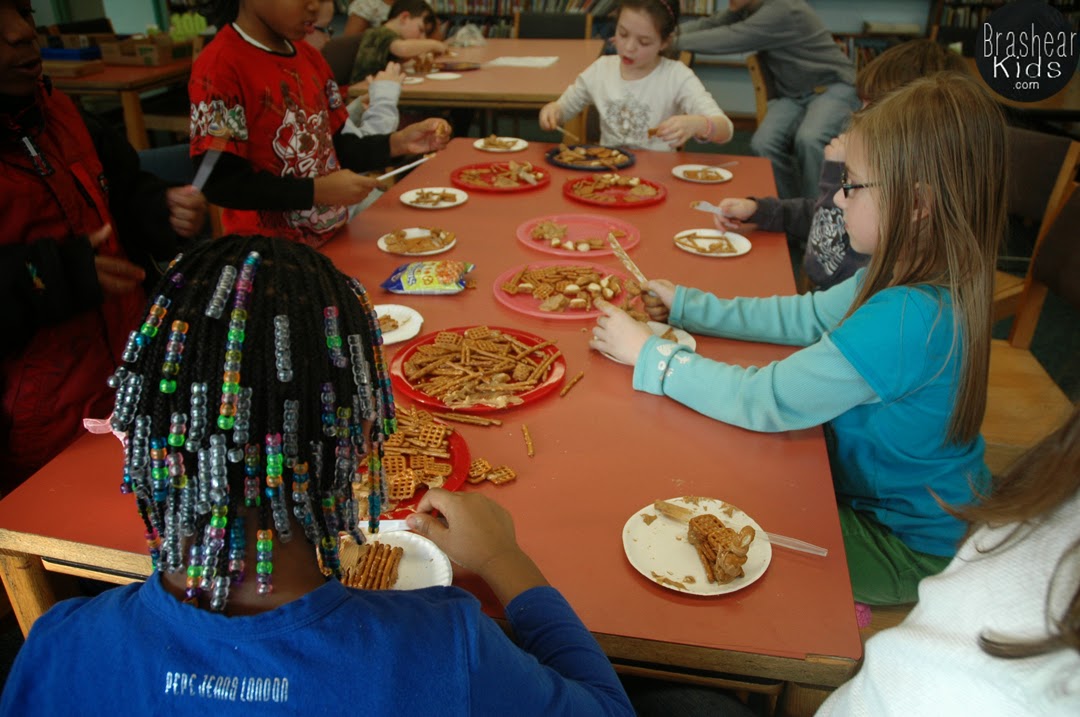 Another alternative to pretzels and peanut butter would be marshmallows and toothpicks. Those materials would lend themselves to making skyscrapers, which would be more dramatic when tested on the shake table. Again, marshmallows would still not be very healthy when it came time to eat the project. 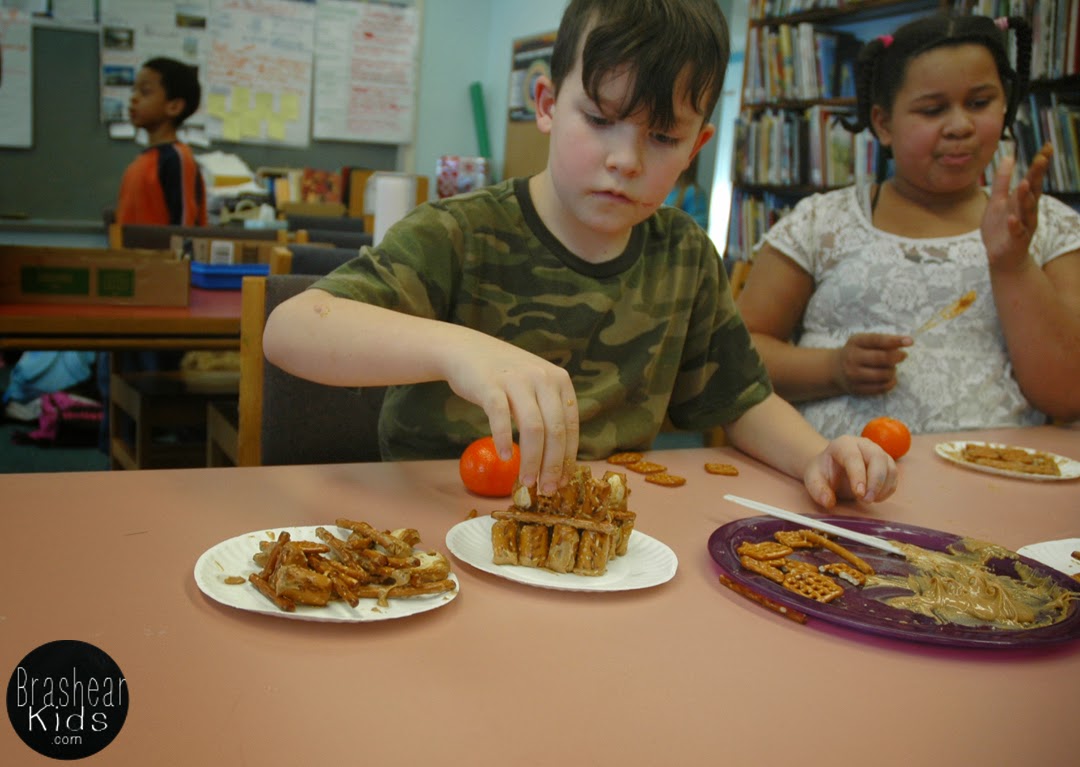 Earthquake science goes well with food. Before we began building our test houses, I showed my students a presentation I made on Keynote. To explain basic Plate Tectonic theory, I compared the earth's crust to that of a delectable chocolate cookie that just came out of the oven. The outside of the cookie is hard and crispy and divided by small cracks. Inside, the cookie is chewy and a little bit molten. A gently cracked, hard-boiled egg is also a good demonstration of the earth's composition. 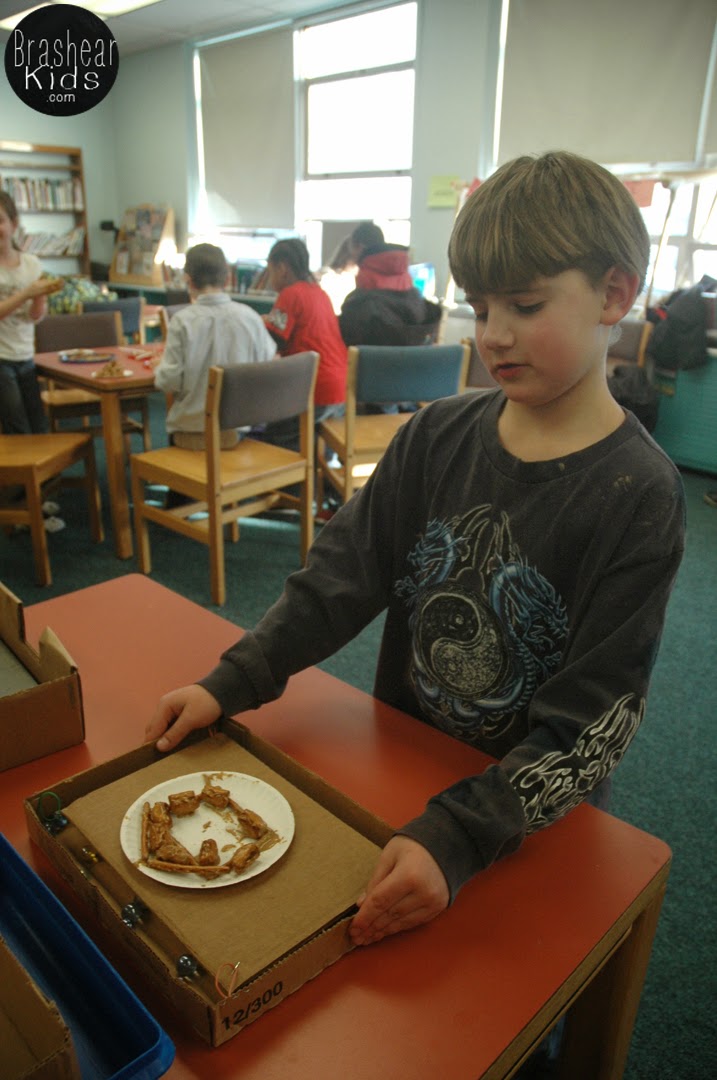 After they finished their houses, it came time to test them on the shake tables. I provided three different models of shake tables, all built from materials you can find at home, such as cardboard and marbles. One table, pictured above, involves using a shallow cardboard box. You put marbles in the bottom, and then staple rubber bands attached to a smaller piece of cardboard to the four corners of the box. The student shakes the box and their project bounces from left to right. You can find more detailed instructions at Newton's Apple. 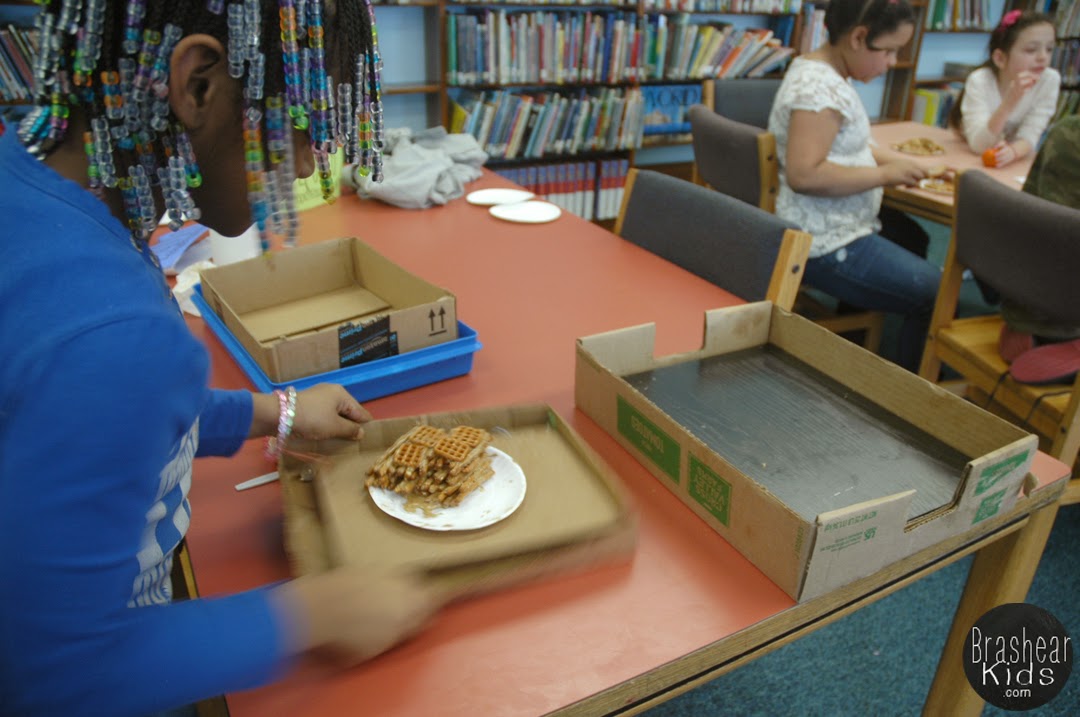 The second box was a slight variation, and involved putting a box within a tray, which was taped to a coffee can lid that slid on marbles. You can find instructions for this shake table at Science Buddies. My favorite shake table was the simplest. I put marbles in a shallow cardboard box, and then nestled a slightly smaller block of wood. The snug fit of the wood to the box allowed for more controlled shaking. MCEER has a good tutorial on several shake tables, and there is also a shake table from Raft that involves using bouncy balls. 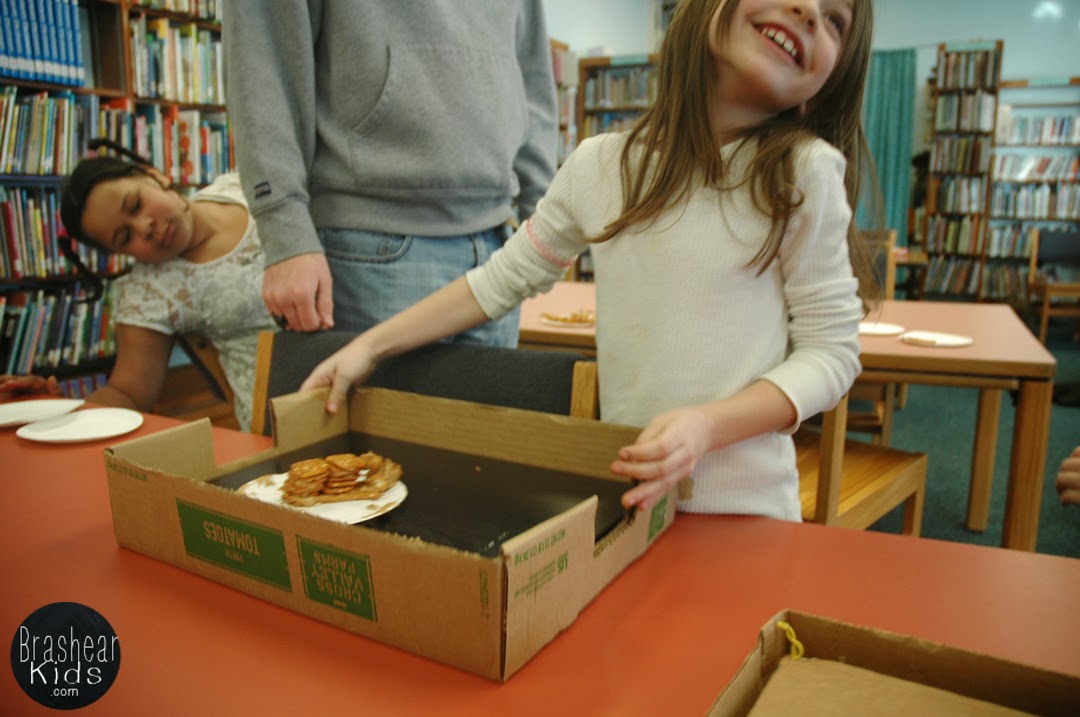 Everyone had a lot of fun simulating seismic activity and seeing if their engineered pretzel creations could withstand the quaking. This was also an important lesson to me because it sparked general interest in earthquakes. Quakes are not at all common here in Pittsburgh, PA (though they can happen, of course!), so they are not on the students' radar. But I wanted to share something of where I come from with them. I moved here from the Bay Area, where we are expecting the Big One and the landscape is riddled with faultlines. Earthquakes are part of my consciousness, always. I'm fascinated and terrified by them. Also, we have spent months learning about Haiti. I brought up the devastation of the 2010 Haitian earthquake, which was much more understandable in conjunction with this experiment. It was a worthwhile activity on many levels!

-Laura
Posted by Laura Ramie at 11:44 AM
Email ThisBlogThis!Share to TwitterShare to FacebookShare to Pinterest