The Pennsylvania Association for the Education of Young Children (PAEYC) hosted an amazing education "UnConference" this past weekend. Amber and I were lucky enough to attend and represent Brashear Association and our work with youth. Half of the day took place at Carnegie Mellon University, and the rest was spent going on field trips around Pittsburgh. 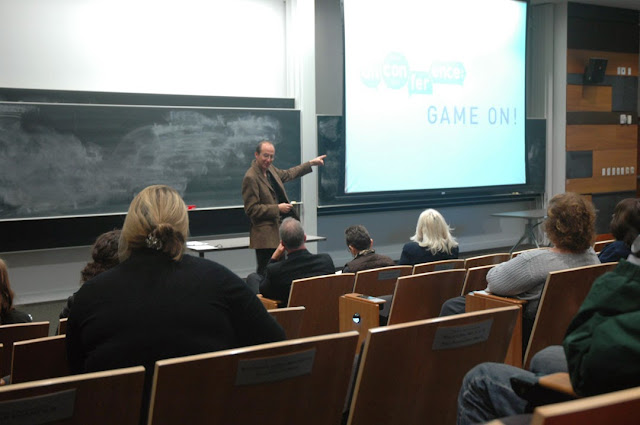 The day started with opening remarks about how to combine emerging technologies with the needs of young children. A notable speaker was Illah Nourbakhsh, from CMU's CREATE Lab. He talked about what makes Pittsburgh a unique place, because of the foundations that care about the city, its tradition of maker culture, and a sense of inclusion he has not encountered in other places. Mr. Nourbakhsh discussed how technology should work to benefit children, and gave us a litmus test to determine if a new technology is truly benefiting the student and the school. 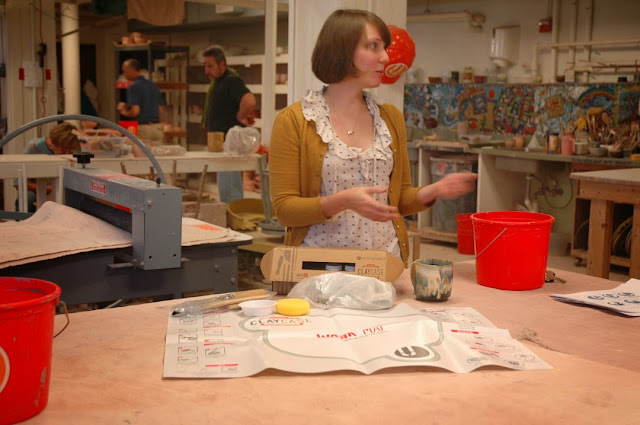 After the enlightening discussion at CMU, we divided into groups and embarked on school buses for our field trips. My group went to the Union Project first. The Union Project is a historic building that hosts a variety of classes,events and office spaces. It is a self-described "incubator" for new projects in the arts and community engagement. We were given a tour by Jenna Vanden Brink, the Ceramics program manager. She brought us to the ceramics studio, which is a place for classes, open studio and an artists cooperative. One of the new things to come out of the Union Project is the Clay Case, a briefcase-like box that comes with all the supplies a child would need to execute several ceramics projects, inluding a mat, tool kit, 2 pounds of clay, glaze and access to the Union Project's kiln. Jenna unpacked a prototype for us. 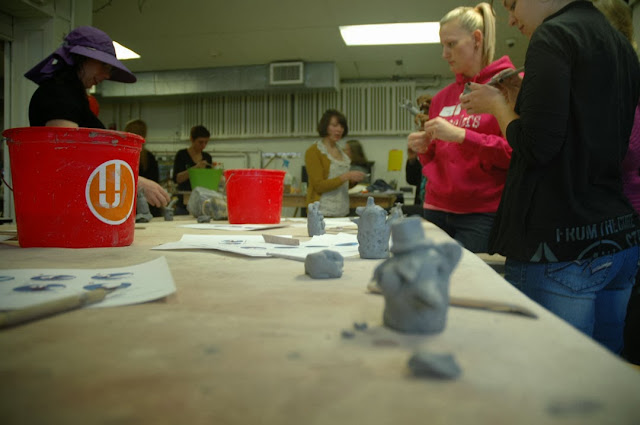 We also got to get hands-on in the studio. Jenna talked about creative lessons to teach kids with clay and lead us in our own project, making clay monster finger puppets, inspired by Where the Wild Things Are. She gave us valuable tips on how much clay to pass out and how to best give directions when introducing children to such a malleable material. 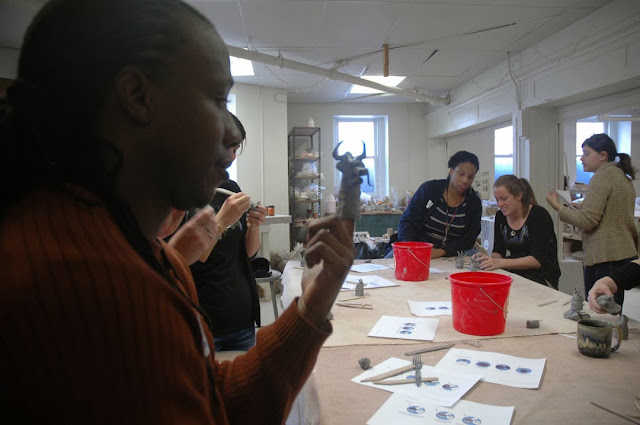 In the space of half an hour, each of us had little creatures perched on our fingers. The ceramicists told us that we should come back to do more work with clay. I was impressed by everyone's creations. 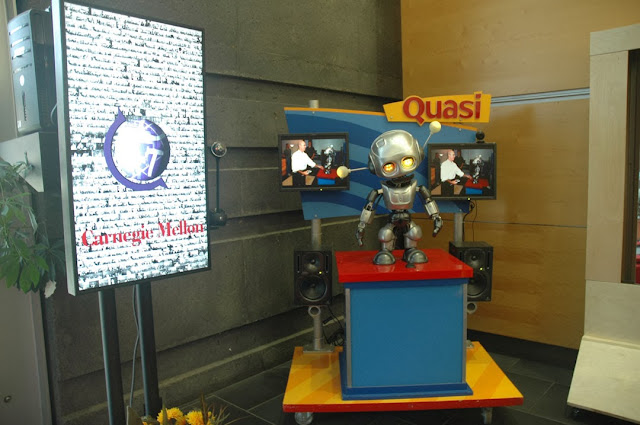 For our second field trip, we ventured to CMU's Entertainment Technology Center. The atmosphere was instantly intriguing and playful. The lobby gave us a taste of some of the graduate students' projects, including a robot named Quasi, a photo compiler, fiber glass Hulk and the Simpsons, and a collection of mirrors that are constantly rotating so they can reflect any motion in the room. 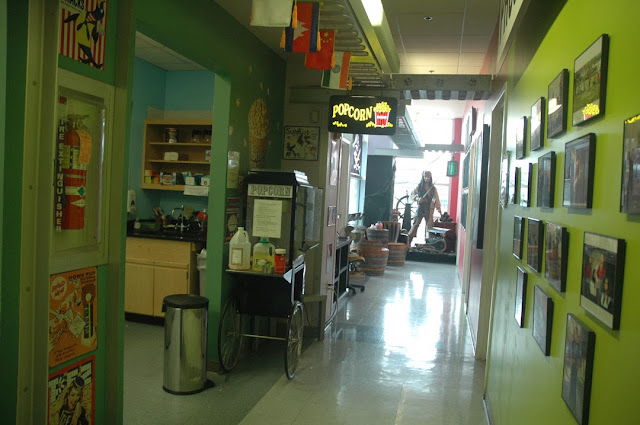 The space at ETC was like a pop-culture museum. There was a space module featuring Robbie the robot, a collection of Star Wars props, life size Pixar and DreamWorks characters, and an impressive collection of super heroes. Even the restrooms were themed and decorated. 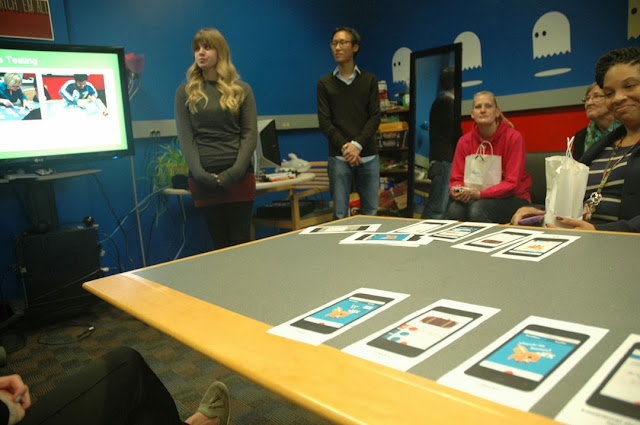 We were brought into a small theater and shown a 7-minute animated feature called "Where's Miss Merry?" This was a 16-week project produced for the charity Give Kids the World. After that, we saw a presentation by a team of grad students. They are in the process of producing a mobile game called Locanimals, which is like Pokemon meets Four Square, and would allow players to collect creatures that they could find in different Pittsburgh locations. They talked about their production process, including interesting bits about their search for an art style, user experience and tests for art direction. 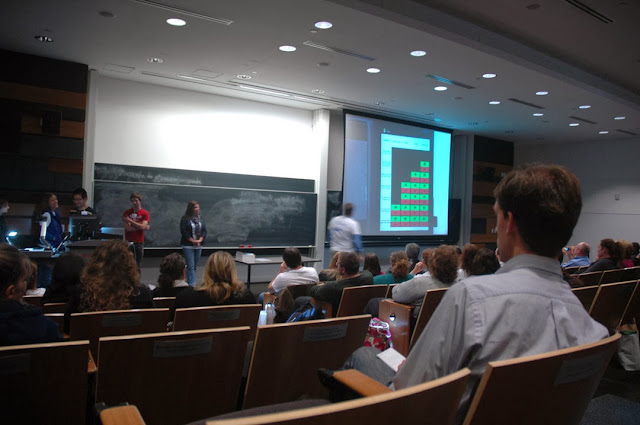 The day concluded with a return to the Hillman Center at CMU. Five groups of tech innovators, educators and students gave us demonstrations on the Apps they built during a Google hack-a-thon. These apps included a website called "Sub Helper," that would make life easier for the school substitute, and "Data Shade," which gave teachers a way to track their students' progress in mastering skills. After that, the groups shared their experiences at the different field trips. All of the trips sounded amazing... I came away with a zeal for innovation and new ideas for program!

-Laura
Posted by Laura Ramie at 12:12 PM
Email ThisBlogThis!Share to TwitterShare to FacebookShare to Pinterest